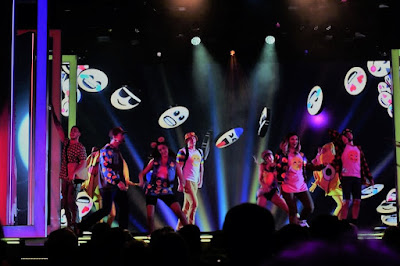 There was spontaneous applause when the curtain rose well before the performance in the theatre. We were not alone in missing these popular extravaganzas, even if I had met some who equated the solo act showtimes with their solo acts with the authentic production shows. They obviously were new cruisers. Now, production shows like this are presented at casinos and the like. Not Shakespeare, but popular and involving and production-wise, stunning. This was all that and perhaps the best I've seen but I only know them from cruises. This was named Fantastic Journey, starting with a 180deg projection and a computer-generated skull speaking. Big deal; this is a new ship laid up for Covid, but the tech shows. Incredible sound, digital samples, clearly composition in the box, lighting and strobes and the performance, costumes, dancing, singing, more projections. Just awe-inspiring, stunning throughout. There was a James Bond number (the staged violence didn't appeal), a cute boy-meets-girl thing, someone mentioned Il Divo and Lady Gaga (describing the women's white costumes as extravagant doesn't do it justice), even I recognised Michael Jackson, so there were derivations, but the quality, the intensity, the aural and visual experience took my breathe away. I drooled over the sound, toyed with the sampled composition, was in awe at some of the accuracy of the references, again overwhelmed by dance and show and vocals. Approx 5 male, 5 female dancers, 2 feature singers and about 5 others, perhaps, and sound and lighting and backstage and composition and all the rest for such a performance. Hard to do justice to all the latest excesses of such theatre. Awesome is probably the word. Oh, and the drones! Wow. Like lions and Colosseums of the time, perhaps; awesome, popular, populist genius. I loved it.

Then we all got Covid.

Fantastic Journey was a production show on the Majestic Princess.