I didn't expect authentic latin sensibility with an outfit called the Pacific Duo but it we did get it and it was impressive. Yadira (Clara) Delgado sang to the accompaniment of Juan Carlos Alvavado on keys. We got a range of latin tunes, bossas, tangos, Cuban, some standards. Some authentic singing but also that unique stylistic awareness of latin. Obviously authentic and learnt in place. Juan played piano with synth accompaniment for a bass line and drum machine. The bass line was not overly complex but the solos and piano presence was, all latin timing and syncopations and telling harmonies and dissonances. Al this tends to happen in the presence of chatter and bar talk, but his style was real, reminding me of complex movements and interplays of samba and like bands and associated dances. Not at all the often tame jazzy takes on latin that I know and sometimes play but an avalanche of colour and movement that is what this music is, but still somewhat unexpected and too seldom heard in my place. There's considerable latin presence in Canberra. I think maybe I should get out for it for this was exciting and an eye-opener. 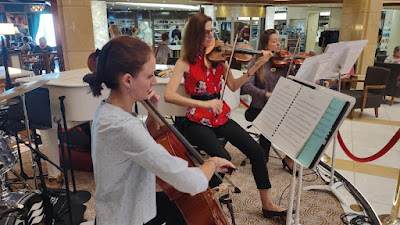 More classical with the string trio called Capriccio. Three women, violin, viola, cello, playing popular but worthy musics, Mozart and the like. Decent players, well trained, Ukrainian (odd how often they are Eastern European and women, presumably given their training and perhaps other opportunities), pleasant and capable. Then another gig that surprised me. They played Beatles, Michael Jackson and more. I heard a dirty bass-cum-cello on Billie Jean and was taken aback. I looked for a pedal but there was none. Then I noticed drums, so a backing track, and the recorded bass was that dirt. So not quite that authentic but diverse. They didn't express a particular love for these pop styles, but they played them. So be it. This is pleasant music, yes, but not trivial, and they are capable players, so they had a decent, quiet following and I was one.