...but not quite no jazz 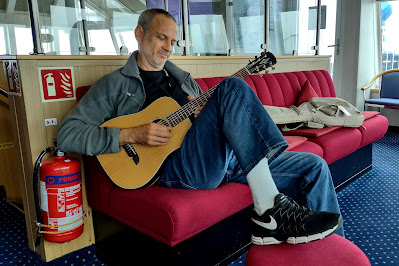 We were lucky to have a capable guitarist on board serenading us each evening as he played his travel guitar. David Landon is from Berkeley, California, across the bay from San Francisco. He's played blues rock professionally in Paris and elsewhere, still playing festivals and running a studio (Whip Records) to record such luminaries as Taj Mahal, Tuck and Patti, Lenny Williams and Adam Duritz of the Counting Crows. No slouch. He describes his style these days as more singer songwriter, but I've yet to hear his albums. We heard some seriously satisfying improvs during Happy Hour, played from memory of bluesy pentatonics and a string of melodies, not least Charlie Parker bop. It's the closest I could expect to jazz or the like in Antarctica. A great pleasure and quite unexpected. Thanks, Dave.
David Landon visited Antarctica on the Ocean Nova.
Posted by Eric Pozza at 1:17 pm