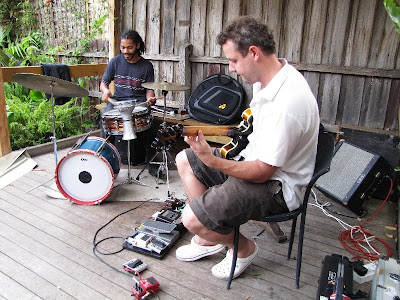 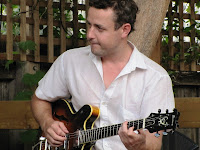 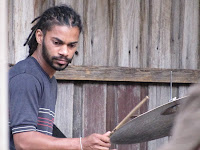 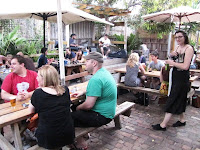 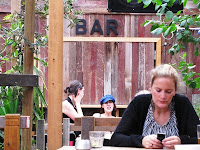 These are the local joys that visitors only happen on, or get invited to. I’d talked to Rajiv Jayaweera the night before, at Paris Cat, and he invited me to a beer garden gig with Ben Hauptmann at Brunswick Green on Sydney Road. I was interested. Guitar and drums, no bass, with a favourite guitarist. And it was bliss. I only caught 30-minutes, but this was great. Coopers on tap; a vibrant beer garden scene in a cosmopolitan area; wonderfully threatening weather; Ben’s richly looped guitar/s, two, three, four layers with crisp or overdriven solos blaring away on top, and a joyous communication with Raj. Lots of smiles; plenty of indulgent playing that was bliss to anyone who bothered to listen. I like a listening environment, but I also like quality background music where players are a bit self-indulgent, playing to their wishes and inevitably to their strengths. I was just reading something on this in extempore. A muso was describing how his best playing is often that when he most seems to be ignoring the audience. Now, musos can be lazy, ignoring the audience and also their playing. But this was one of those good gigs, where the musos play for themselves and incidentally for the public and it’s great. Twangy, screaming, swinging, whatever, this was played true to style, simply correct, easy and unforced, masterfully. A wonderful outing. What tunes? It finished with C-jam blues, that simple but masterful melody that appeared several loops into the tune to smiles on my part. Other tunes were more chordally complex and with that Hauptmann rockabilly presence, so presumably originals. Whatever, it was a small bundle but a stork-like bringer of joy.

Ben Hauptmann (guitar, loops) played with Rajiv Jayaweera (drums) at the Brunswick Green.
Posted by Eric Pozza at 9:09 am