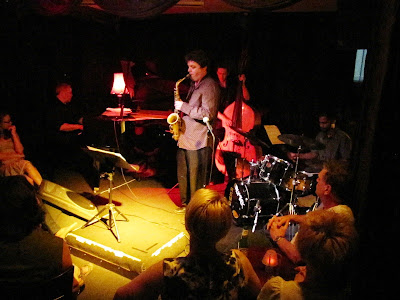 I’m surprised at my reaction to Mark Fitzgibbon and his quartet last night at Melbourne’s Paris Cat. This was the opening night for 2011 for Paris Cat (Bennett’s Lane and Uptown and Dizzy’s are still closed). The place was packed with perhaps 90 people and standing room only. It was hot and sweaty, and the first tune was Hot house and it was steaming. I felt like we were in a period piece: authentic, but also somewhat removed. The club’s ambience is of an era: dark, brooding, Picasso-modern. The volume was restrained, not contemporary in-your-face but acoustic-like: good for the ear drums, but also less involving. The audience was large, but one that streams out at the last tune. 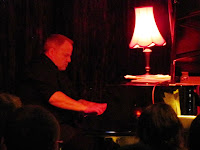 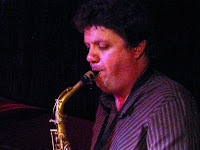 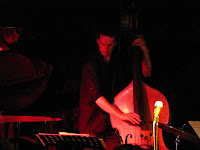 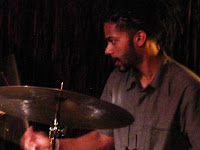 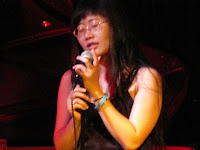 Certainly Charlie Parker's Hot house placed the band, and they played it with comfort, and Dave Rex, the alto player, with abandon. His playing sat so well with the bop style, running the chords with ease, then weaving and turning with extravagant contortions and falling to tritones. Rhythm section, Rajiv Jayaweera and Tom Lee, were comfortable and solid. Tom’s tone is soft and clear and his is playing cool and considered. The flourishes are in his hands rather than his playing. Raj always appeals to me as similarly cool and the one solo I caught was understated and might have passed as accompaniment, but there was also gentle flamboyance in those responsive hits from the bop tradition. Mark called up singer Sonia Veronica for a ballad, Billy Strayhorne’s A flower is a lovesome thing, which was performed purely and touchingly. I particularly enjoyed Tom’s bass on the ballad, so clear and sparse. The other three tunes (I only caught the second set, and it was disappointingly short) were presumably originals from Mark’s album, soon to be released. These were in the post-bop tradition of solid melodic statements and fewer chords and less frequent changes. Two were slow. One was a rock rhythm. A third was a ‘60s hard bop with medium-up walk. Nice open vehicles for improvisation. This is where I took note of Mark against a cool rhythm section, busier, swishing through arpeggios, softly but with controlled energy. 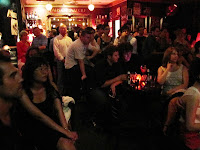 These are just minimal notes from one set that ended unexpectedly. Nice playing well positioned in a mainstream period. Mark Fitzgibbon (piano) led a quartet with David Rex (alto), Tom Lee (bass) and Rajiv Jayaweera (drums). Sonia Veronica (vocals) sat in for one tune.
Posted by Eric Pozza at 11:55 am