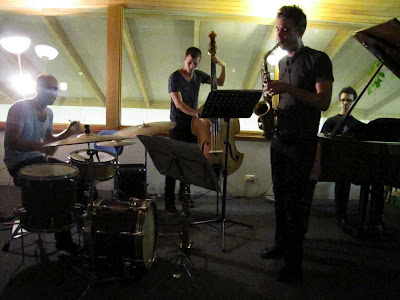 Second sets can often be the strongest, and that’s how I found the performance of Jeremy Rose last night at the Loft. It was actually a slightly strange night with a small audience and a band that must have been a bit disappointed. But I noticed during the second set that the band was different: more settled, unpressured, warmer, quieter, more free-flowing, easier grooves and interactions. Given little audience, you can play somewhat to yourself. There’s still some obligation, but it’s more intimate and personal, and anyway the audience was musos so they understood. 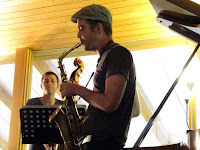 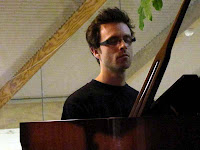 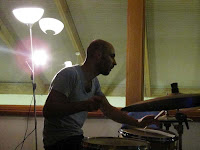 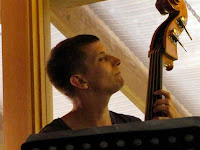 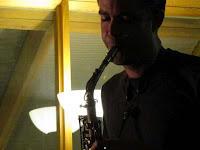 This was a CD release tour and the music seemed to be all from the pen of Jeremy. It was a wide range of originals in various times and honest styles, feels and melodies. Well placed with passion, but also with location. Immersed in history, within the great modern tradition and touching on early modern, and located in place with clear references to Jeremy’s Scandinavian connections but also with new world energy and brashness. “Never wear red pants at a bull fight” was reminiscent of Mingus in tune and title, alternating between bass riff and walk, with a bluesy overlaid sax. “Prelude” was a smoothly flowing introduction; “In transition” was boppy modern against a rapid walking bass; “Avant garden” was in 14. Jeremy introduced “My space” as influenced by a composition teacher in Oslo who was interested in maximising ideas from melodic fragments considered as horizontal lines. The outcome was a 4-bar melodic snippet that mutated harmonically in 3/4 time. I enjoyed the harmonies in this music: gently moving and an interesting chordal base for solos.

Jeremy has an easy fluency on alto and soprano saxes and an ease with dissonance that I noticed especially on the snake-charmer-like soprano. Jackson Harrison’s playing was sustained and sometimes fragmented, variously fighting the beat or riding it, stating ballads with sweetness or up-tempos with some contention. Abel Cross sat in for Alex Boneham on this tour and did a great job on some very demanding numbers. He was playing a stubby Czech-eze bass with a delightfully soft presence in accompaniment, although I would have preferred a bit more volume. James Waples was tellingly disjointed, inventive and apt. I enjoy the contemporary willingness to play away from standard sound mixes so I was intrigued with a passage of fast, free playing by bass and piano against sustained hi-hat patterns. James’ solo at the end on the night lifted the house in a crescendo of thought and power that incessantly grew to lift off then suddenly ended as he stopped to retrieve an errant bass drum. I’ve observed just a few players who can’t help but take off in solos and I think they must be naturals, or at least naturals in solo structure. This solo was like that.

It was a strange night with that diminutive audience, but it lent it a unique presence. The event was somewhat disappointing, but in response the music was intimate and connected. Jeremy Rose (alto, soprano sax) led a quartet with Jackson Harrison (piano), Abel Cross (bass) and James Waples (drums) playing his own compositions at he Loft. Jeremy returns to Canberra at the Gods in a few weeks’ time with the Vampires. And don’t miss anything at the Loft: it’s infrequent but it’s the most adventurous modern jazz around town at the moment.
Posted by Eric Pozza at 8:58 pm