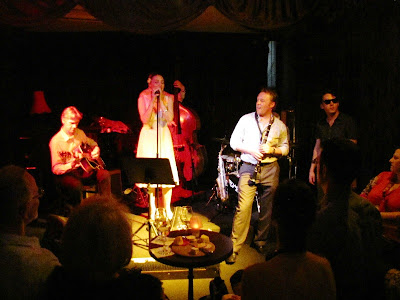 Leigh Barker led the band in a few instrumentals before Heather Stewart came on stage, and I was thinking this is so far back … way back. This was a Billie Holliday tribute, so I knew it would be early in jazz history, but I was not quite prepared for the trad playing: two-feels and clarinet and strictly arpeggiated trumpet and four-on-the-floor guitar chords on What is this thing called love. The following tune was Old fashioned which was just confirmation. Then Heather came to the stage with Moonglow. A beautiful tune, of course, but continuing the era. All very much pre-bop. But these guys performed with panache, good humour and wonderful musicianship, so even this beatnick was taken by the end. 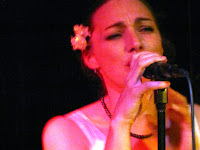 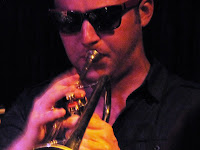 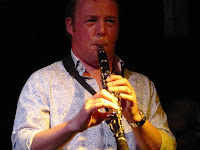 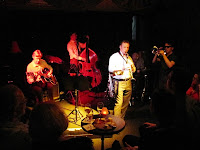 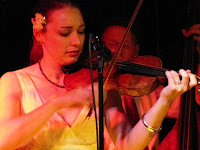 The songs were obvious and many have been done to death, but they swung and they had inherent humour which was just enhanced by Heather’s ever-joyous presence and occasional improvisation on the lyrics. How can you not like an era that produces lines like this: “Get your fingers off it / ‘n’ don’t you touch it / you know it don’t belong to you”. Nothing too opaque about that, although nothing openly stated either. And delicious numbers like After you’ve gone, or intense blues like Low down blues, or innocently optimistic larks like When you’re smiling, or nautically romantic songs like Sailboat in the moonlight or Slow boat to China. This was a great era for songwriting, despite some I still can’t take to, like All of me or Sweet Sue. I still have to learn to appreciate such informed silliness. Heather helped with her engaging humour but also with a sense of phrasing and variability of lyrics that spoke of the great singers. And she most easily led this band, although in a democratic way. It wasn’t rehearsed, she was open about that, but it melded, despite the negotiations on keys before a song, and the relaxed approach to the set list. But then these guys were good. The horns were great. I’d heard Eamon McNellis before and was not at all surprised. He’s got easy facility to play the changes with great clarity and with controlled tone (and thankfully, volume) but he could also let go, and with ample confidence. A long articulated pedalled note that led to flourishes, and later his ease with playing sustained eighth note lines, doubling to sustained 16th notes, then further doubling to sustained 32nd notes was seriously impressive playing, even at a relaxed tempo. Jason Downes completed the horns, mostly on clarinet but also on alto. I don’t often hear clarinet, so it imparts that old-time feel, with octaves and glissandi, lithe, snakey, bent thing that it is. But it sat nicely with trumpet for collective improvs, or improvising against a trumpet melody or less frequently playing melody with trumpet improv backing. Jason took a similar role with the alto, but I certainly found his alto solos more understandable for my ears. Collective improvisation is something modern players are toying with, and there’s lots to learn from this era. Otherwise, I just lapped up the lovely harmonies of a decent horn section, even only in two. That was so nice. 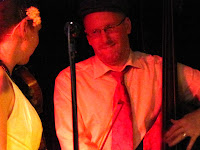 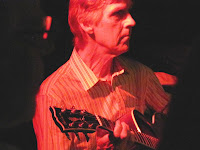 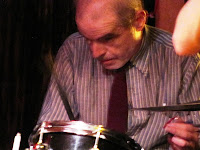 The rhythm section took me back further, though. Lynn Wallis was seriously into two-feels on drums. It’s true to the trad sound and Lynn played them perfectly well, but those trad fills and the grooves just don’t swing that much to my ears. Similarly John Scurry on guitar with banjo-like four-on-the-floor guitar comping and a very soft, unsustained, woody guitar tone. I enjoyed this well enough and particularly enjoyed the tone which I expect is of the era with no amplification, but it dated the music for me. Similarly the chordal solos with those fast strums and chord slides. All perfectly good playing from Lynn and John, but old-fashioned to my ears. (Thinking back, it’s strange how the timing for the overt parts, vocals and melody, was so malleable, while the underlying beat was so squared, but I guess this is trad and bop was to change that). Leigh was his capable and fully-toned best. Ably and clearly stating chords and not missing any passing changes. I was surprised not to hear slapping, but maybe it’s out of place in this context. His solos were always relaxed and lyrical, and I was impressed when he was toying with the melody of All of me in a different key and Heather called a bass solo and he could easily continue the melody with variations. It was only All of me and only G but that’s musical competence.

So in summary, I really liked this time travel by the end. The malleable timing, the good natured vibes, the relaxed tempos, the harmonies and collective improvisation and some very, very good playing went down a treat, even if the cut time feels and clarinet slides are still borderline for my ears. Moulding the fig is a work in progress for me, but with musicians like this, I’ll enjoy the apprenticeship.