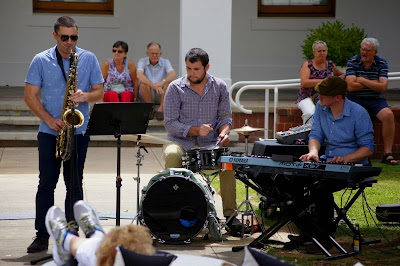 Alex asked me had I been there before and were there always so many at this gig. It's not too common to have decent numbers at a jazz gig, doubly so these days, but there were lots. This is the Old Parliament House Cafe and it's a comfy visit to sit in an enclosed garden under mature oaks (?) so good for tourists and locals alike. It's civilised. But this was a lovely warm day and it was a slightly bigger crowd than usual. Lucky band. I know Dan from recordings more than live and I was impressed here too. Lovely firm raspy tone and majestic bluesy conception. Great playing, not forced but strong, nice diatonic lines with just an occasional lapse into dissonance. Melodies that are simply stated but wonderfully present and apt. The grooves were good, too. Alex apologised (jokingly) to me for doing left hand bass lines (me being a bassist; no, it's not the same) but he did it well, as well as the right hand chords and solo lines and the rest.

Nice. Kay, too, swung easily or laid down latin grooves with lightness and flexibility. Just standards and quite smooth, but nicely stated and perfect for this outing. Georgia, too; not may favourite but nice. I preferred the bop blues and Green Dolphin Street with the coolest swing and Black Orpheus. I may have been the only one tapping his feet, this not really being a spot for the afficionadoes, but it did swing nicely and the wide-landed public enjoyed it, so a success. Good job done. Dan Bray (tenor) played with Alex Carder (piano) and Kay Chinnery (drums) at the Old Parliament House Cafe.
Posted by Eric Pozza at 9:15 pm

I love the fact that this gorgeous space is being used again. Was very sad when Cafe in the House closed. Sounds like a gig I would have enjoyed.