Changing for the climate 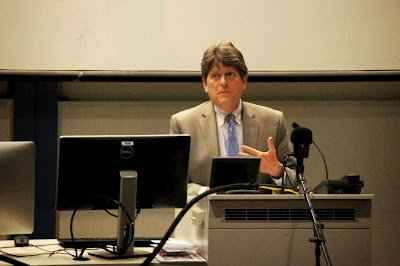 The session was about transitioning from fossil fuels, so I shouldn't have expected science, but I was just a bit unsettled when a cheer arose from some young audience members for an argument that telling the science doesn't work. I could even agree, but I'm wary of pomo, new-agey, post-enlightenment thinking. I think Bob Massie was actually talking of promotion and emotion and PR and how to get a message across, and that I can understand and agree, but I was wary here. But I found the discussion of transition, of building a new economy, of alternatives to neo-libs and conservatives (read, our current government) quite positive and hopeful, especially hearing of Boulder Colorado taking over its own utility company when they refused to use more renewables because profit would suffer, or Dan Musil of Earthmother Cooperative telling of building alternatives right now, here, in Australia. Bob spoke broadly about transition. He quoted requirements, like fairness (again, think our Government), resilience, hard changes. He said Australia is in a key position to determine the future, but noted the urgency (again, sadly, our failing Government). He noted that climate events are happening already (statistically this is a fact). He gave examples of historical change and it was more rapid than I imagined: canals built in the US for transport lasted just 30 years; a Ford assembly line, 30 years. You have a choice: "Let change happen to you or determine it". He talked of the Carbon budget, and that 80% of fossil fuels must stay in the ground. "Expose this! Don't be intimidated!"

That Bush/Cheney were both oil executives, but the message is getting through after Hurricane Sandy. He questioned our stupid government adherence to coal (obviously just plain dumb; either echo chamber thinking or a sell-out; and these guys claim superior economic management???). He quoted JP Morgan, IEA etc on the demise of coal, and Obama's exit strategy, and China's moves and, interestingly, India's Government's pledge to end coal in 2 years (this was new to me; what of Adani?). He talked about Top down, Bottom up and From sides models for transition. Germany is gung-ho and Top down and is the strongest economy in Europe. Bottom up is harder, but see Kentuckians for the Commonwealth and the actions of the Navajo and Peabody and Washington State, where the final coal plant in the US North West is planned to close. He talked of the roles of institutions: churches, universities, foundations and that ANU and Rockefeller are divesting. He talked of the "New Economy" as an umbrella term and didn't seem to signal a return to caves. He spoke of leaders in the new economy now being local: citizens, mayors. (This is the US and not directly parallel). And various quotables: "imagine alternatives"; "leaders in the US are now 19/20 years old; back youth"; "don't invest in the past" (=coal, most of us understand that); "when threats appear, pool together"; Australia can "change ... the destiny of the world" (I would like to hear more here!); "the stone age didn't end for lack of stone" (he suggested Bill Clinton but Wikipedia has the quote from Ahmed Zaki Yamani, 2000). He suggested a tipping point is near for a public demand for change (we hope) and supported coalition making: "people can agree on some things for different reasons". He quoted Alex White "Global warming amounts to a new class war" and "the problem of climate change is a problem of capital" so structural change is required. He promoted subtle change, like ballast that shifts a ship, and making capital more democratic (more discussion needed here!). He suggested corporates are dying and suggested worker groupings must also change (see Freelancers Union in NYC). "Just repeating the science isn't going to have the effect" (ie, to bring public support). This brought the whoops from the audience that worried this rationalist. "Radiate a sense of purpose" to influence others. Climate change shouldn't be an environmental issue, it's an 'everything' issue". (Somebody tell Greg Hunt). Promote an inclusive movement, talk honestly and promote better discussion, even on budget and taxes. Interestingly, he mentioned "participatory budgeting" in some US cities, where some money is put aside for allocation through a citizen decision-making process. Some questions; considerable hope; some alt. sounding approaches. Let's hope someone can pull it off or we, or rather our children and grandchildren, are in deep trouble. The next marker I'm looking to is Top Down, Paris, later this year but perhaps that's the enlightenment bureaucrat in me. Many at this event were far more focused on the local.