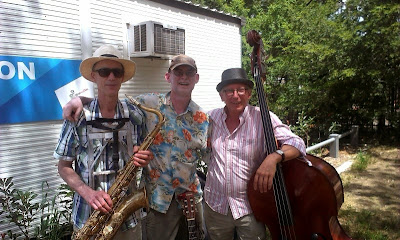 The Cricket World Cup came to Manuka Oval. We didn't attend the oval, but we did perform at the gates and experience some colour and anticipation and enjoy the good cheer. It's a nice thing about sports in Australia, that it's good natured and joyous, mostly regardless of the competitors. We should be thankful for that. Something about the easy-going nature and warm weather and financial comfort wears off on competitions. This was Afghanistan, in their first entry into the World Cup of Cricket, versus Bangladesh. Amusingly, I was listening to BBC radio the other night and they were talking of cricket's entry into Afghanistan, just after we'd been booked to play outside the gates for this game.

The weather was warm, sunny, and the supporters were dressed in colours and singing in anticipation. Our second set was against the first overs and there were waves of anticipation as cheers rose in the stadium. For what, don't know. Not so much for us. We played well enough but were there for the colour. One swinger went well, especially as the bass carries better on a swing. I was playing acoustic and it was not loud. Then some singing and harmonies on rock and roll and Summertime and the like. Fun and indulgent. A memorable gig even if we aren't remembered.

Richard Manderson (tenor), Toby Morison (guitar) and Eric Pozza (bass) appeared as the Inswingers at the Manuka Oval gates for the World Cup of Cricket.
Posted by Eric Pozza at 5:05 pm