Not deadly dull, now what? 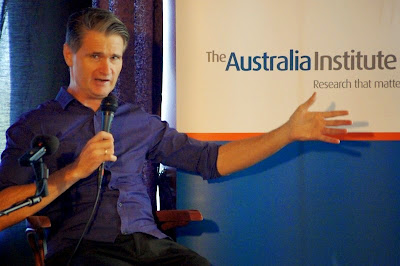 Bernard Keane started his session at the Politics in the Pub, the first for 2015 and only early in the political year, with the comment that it's been "deadly dull". Of course, it hasn't been. Apparently we expected stable government after Labor, but after half a term, Abbott has "stuffed it". Two first term Liberal governments dumped (Victoria, Qld) and SA Labor winning a fourth term; submarines virtually a "captain's call"; budget in a mess and another due. Abbott's response to a near-death experience is to return to form, as if aggression was missing from 2015. Labor's had a dream start to opposition which has made Shorten a credible alternative PM ... but only in comparison, and what of election day? BK: "I'm underwhelmed". He suggests recent lessons include that NO-ing in opposition, small targets and no policies results in a ministry with no skills to sell policies in government. "You can't govern negatively". Greens had a great election 2010, then a poor 2013 after Bob Brown left, but have picked up. The economy is at a juncture and it's important! There's panic in RBA announcements. The government has a stimulatory stance, especially given $A1 at ~$US70 (Wayne Swan had to battle at $A1~=$US1.10) and interest rates are at historic lows. Yet the RBA cuts rates and more coming. The first two quarters of 2014 had strong growth, then the budget and "stumbles and ineptitude" "smashed consumer confidence". Hockey's clearly not up to it, but Bernard has respect for Mathias Cormann (interesting). But the deficit goes up and Labor continues to get the blame from Hockey et al, although budget was 19.9% of GDP in 2012 (Swan) and 22% of GDP in 2015 (Hockey). If "surpluses are in our DNA, then deficits are in their bone marrow". The Right has now started the line that the public won't accept economic reform and we'll end up like Greece, but it's "complete crap". Voters actually don't like privatisation where it's a gift to the private sector and the public loses out; otherwise they are of mixed mind. Industrial relations changes are in much the same bag. 60% recently polled that minimum wages were too low (I'd like to see this survey) and that included Liberal voters. Superannuation tax concessions cost $30b in 2015 and this is skewed mightily to the rich. Medicare Private was sold "sensibly and effectively" (later queried in a question from the floor). It's not political communication, but poor policies. However, communication remains important, especially to promote effective policy. The Hawke/Keating era is idolised, but it was a "simpler era" with the press gallery cooperating virtually as part of the governing class as gatekeepers. There's more clutter now. Data retention = Mass surveillance, despite each daily message from Abbott's for its justification. It's a direct threat to media and journalism (and the rest of us, BTW). The Big Lie is that it's not intrusive. Metadata actually provides more and more reliable information than content. Snowden: "You can't trust what you're hearing but you can trust the metadata". I didn't get the details of this quote, but apparently from head of NSA: "We kill people based on metadata". Voters have no understanding of issues over metadata retention. Questions covered journalists "colluding" with politicians to ignore climate science. BK responded there's little opportunity to question pollies these days so little chance to collude. Someone queried the merit of Medicare co-payments and the sale of Medicare Private. BK stated his more economically dry acceptance, but then noted that Abbott has actually cut infrastructure despite all the talk. There was discussion of corporate tax dodging, of recent news of NewsCorp, of trust in a tax system. All obvious enough background to a 2015 and a damaged government and a run-up to a budget (only their second!) and eventually another election. Whoa; there's NSW soon, too. All interesting for a political junkie like me.

Bernard Keane of Crikey spoke at Politics in the Pub for the Australia Institute.
Posted by Eric Pozza at 8:19 am