Other uses for a violin 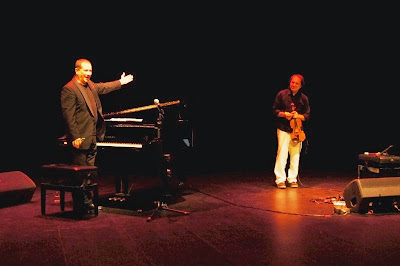 Chris Jarrett and Luca Ciarla were at TheQ. This was nice, daring, music: not just jazz, at least jazz as implied by the American songbook, but jazz in its all-inclusive modern form, broader and more adventurous. Folk inspirations and 20th century classical piano styles were as much an influence. And it wasn't just the jazz community in attendance. The tour was conducted with collaboration of the Italian Embassy and Italian Cultural Institute of Sydney so there were many suits amongst the jeans. They presented as civilised, laid out under lights on the stage at TheQ. Just foldback and a few mics and a grand piano and Chris recording for ArtSound. I was taken by Luca's woody tone - nothing at all like an amplified sound except for a few peaky spots. He was obviously using a mic on the violin and it sounded great. It even covered for a mic that wouldn't turn on when Luca spoke through the violin to the audience. That's an amusing stage prop! They didn't speak too much, mainly playing then bowing between pieces, but they were pleasant when they did. They played various duo pieces, written by either player, and a few solo numbers. Luca's included a folky Italian tune from WW2 that he built with loops. Chris played thumpingly virtuosic chromatics and chordal solos interspersed with pensive segments: think Ravel or Debussy. They played different times, obbligatos, violin slides and piano sequences and diatonics and chromatics. And they did it with convincing warmth and responsiveness. Modern music with wide influences and warmth of performance.