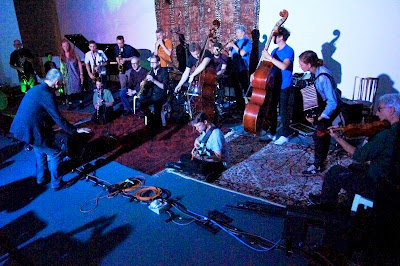 These two don't quite fit my SoundOut themes - Textures and Free. One was a workshop and later performance led by Jon Rose. I attended, and played in, the workshop but missed the performance. This was an experiment in sound design. Players were paired. One bounced a ball; the other performed in response. There was a table tennis table with ongoing game. Any pair should balance with other performers, keep to its own groove but improvise with awareness. Jon suggested simple could be more effective, although I noticed his performance was anything but (he's a master and it shows!). We had two goes in practice. I felt some consistency early in the first, but intent faded into the second. It's surprisingly hard to formulate a response and maintain purpose and consistency. But as musicians we know that. The other outlier was a final all-in conducted improvised work by all listed performers for the two days. It was surprisingly short, effective and obviously enjoyed. I was amused to final Richard playing a fairly straight solo on bass clarinet, and when it was all over, Richard with paired bassists and Miro on trumpet playing a blues, no less. Now, what's that doing at SoundOut. Other than bringing on a few late-session chuckles. Then it ended, all good will and chatter and dismantling of gear and memories to hold till the next extravaganza of free and experimental music that is SoundOut. Congrats especially to Richard Johnson who is the artistic director of it all.
Posted by Eric Pozza at 5:26 pm