How nice is this! 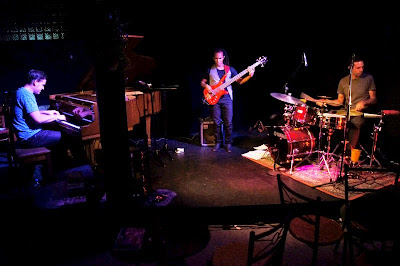 They tell me Brisbane is undergoing a renaissance (has been for some time). If this is an indication, I'm sold (like I was by Steve Newcomb and Hannah Macklin years back). Cleon introduces as Afro-Cuban pulse, experimental, varying time signatures and rhythms. I hear funky 16ths, taking me back to hot fusion. And Cleon's three were hot: burning, even. Just a trio: piano, bass, drums. A rhythm section to dream of, with colour, complexity and drive. I joke to Cleon that he could just sit back and play whatever. I didn't mean it to demean him. He did a great job and was often enough part of that very rhythm section. I just meant these guys laid intense grooves with huge depth of interest and, with that, melody is a breeze.

Chiky plays it all: fingerstyle, thumb, tap, slap, chords, harmonics, the rest, with variation and feel and speed and that indelible syncopated 16th feel. Sasha is there with the drive, varied tones and splits of the beat and insatiable cowbell or rimshot or thumpy tom matched with snare-off snare. Again, busyness, unrelenting drive and lots of colour. He's a long-time Afro-Cuban samba big band player, as is Cleon. Chiky is actually from Cuba. Then over it all, sometimes choppy and part of the rhythm (but not montunos - their repetitive insistence only appeared in a later jam) or more standard in contemporary jazz style and lots of chromaticism big chordal hits, features, long long runs. Cleon did one dedication to Michel Camilo and talked of Chucho Valdes and Gonzalo Rubalcaba in the break. He also spoke of through composition but not without repeating themes and not writing in a key. And that B major falls nicely for the piano (I objected not for the double bass). Then a slap of fast unison lines and hits and I'm chuckling at the excitement and energy and skills of it all. I loved this concert to death. Great. Maybe it's time to catch Cuba, before it opens to the US again.

Cleon's three are Cleon Barraclough (piano), Osmar ‘Chiky’ Salazar (e-Bass) and Sacha K (drums). They were joined for a final jam by Sinuhé Pacheco/Ross (congas).
Posted by Eric Pozza at 9:35 am