And then the gig 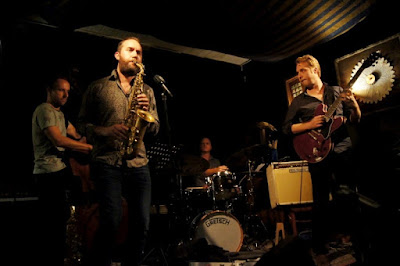 First the workshop; then the performance. Again, I just heard of this days before. There was some confusion over location, but it was Smiths in the end. It sadly clashed with the Gods (never rains, but pours). But this was Greenwich Village's 55 Bar / Smalls come to Canberra. Not to be missed. The hottest Aussie players with Will Vinson. Who? Try this: James Muller, Sam Anning, Tim Firth. Suffice, to say, this was a lesson. We had to clear out after two sets for a sellout for the next band, a hillbilly duo. I felt for them. How could you possibly follow these guys? Just eight tunes over two sets.

Mostly written by Will, but one by James and two standards. I was apprehensive when he introduced All the things you are (yawn). I shouldn't have been. This was a work of bending and contortion to match Houdini, but never without reason. I wondered about the time, but decided it was in ordinary four; just that the melody was twisted and delayed and bunched for a (sometimes barely) recognisable standard. This was something we all know and perhaps love; if you could parse and decode the twists. Something brilliant and alive from something otherwise sadly tame and ordinary. This is jazz at a peak. I drooled over the Tim's pin-sharp drumming that was a foil to enthuse Sam's insistent, syncopated, mobile bass lines. And the solos from each. It sounds tame, but even these guys do swapped eights. And that god, Muller. What to say of a blithering screed of crisp notes congealing into tonality. Stunning. And Will. He'd talked earlier in the day of playing fourth notes, of shorter phrases and listening, of creating melody. Either this was out the window (it wasn't) or he's developed this to such an extent it's a screed of notes but still enthralling. It was. Just a stunner. I'd hate to have been that band following on. You'd go home to bed, I reckon. But then I'm a jazzer and this is what I like and they weren't. A stunner.