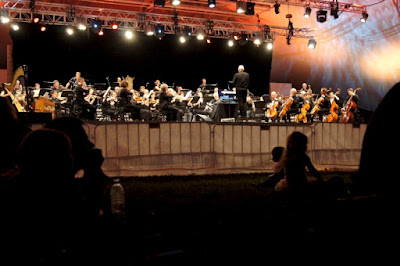 It's Canberra Day long weekend, so everyone goes to Commonwealth Park and Stage 88 for whatever. This year it was was Nigel Westlake leading the Canberra Symphony Orchestra accompanying the film, Babe. The film's a classic, I guess, made locally (Sydney) and winner of numerous awards. It's a joyous tale of a pig that learns to heard sheep on a farm that looks mysteriously more cute English than Australian with its stone walls and verdant countryside.

All fantasy and talking animals and charming and quite touching for a kids' story. And vivid colours and eccentric human characters. NW wrote most of the music (a few tracks were provided by another composer) and famously borrowed a Saint-Saens organ concerto and has recently revisited and enhanced the score. I understand we heard the new score, but I don't know the earlier one anyway. Not that the new score will be installed in the released film, given cost. But a very satisfying piece of music, grand, scary, fearful, joyous, variously emotional as called for and lots of it. This film has a significant and lengthy musical accompaniment. I was impressed by the music and by the CSO which had considerable work to do and did it with aplomb. I was intrigued by the screen in front of NW with its flashing circles and moving bars and various other indicators over the film. Apparently, this is how film conductors are guided in conducting. Otherwise, performers just had their standard scores. It's a family event, so lots of kids, lots of camp chairs and blankets and hors d'oevres and champers. And the weather held out: it was a glorious night. But I didn't stay. I wasn't particularly there for the film, although it was both impressive and entertaining, and I found the music was otherwise secondary, however well it was performed and however interesting it was. So I caught the first half then off. But I remain impressed. Easy going, entertaining and capable all round.

Nigel Westlake (conductor, composer) led the Canberra Symphony Orchestra in accompanying the film, Babe, at Stage 88 for the Canberra Day holiday weekend.
Posted by Eric Pozza at 10:19 am