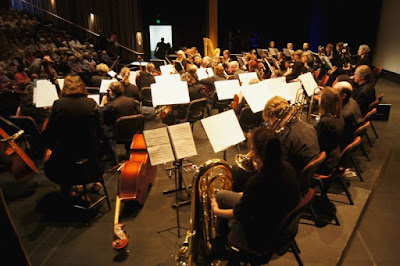 Another fun outing. I am enjoying this orchestral lark. This was National Capital Orchestra with Matt Withers and Leonard Weiss performing Westlake Antarctica Suite, Rodrigo Concierto de Aranjuez and Cesar Franck Symphony in D minor. The Westlake is an arrangement of a work originally accompanying a documentary movie of Antarctica. The music is sparse and expansive, sometimes dramatic, sometimes shimmering, with some odd times and difficult counts, and a lovely interlude for the Penguin Ballet. I loved this piece although I have to admit to missing some cues (not alone?). Then Rodrigo. Everyone knows this one, not least Miles fans. Attractive and lively and again with some challenging counting.

We strings are not used to sitting out and counting (that's the job of brass and percussion). Then an interval and Cesar Franck Symphony in D minor. This is not a numbered symphony: he only wrote one. It's big, dynamic, lyrical, oddly repetitive in different keys (D minor sounds OK, and 4xb or 5x# but 7x#?). There's big dynamics, too. Leonard did a great job on that: we were variously almost indistinct, then blaring with brass (I didn't miss this, it being just over my shoulder). TheQ had a wonderful clarity after our rehearsal venue, the lights and sound (the JBL foldback for guitar was a winner) were great and the seats were virtually sold out. So, a great outing. Next NCO is Koehne, Boieldieu and Dvorak at TheQ with Alice Giles in May, sandwiched by Sunday concerts from Brindabella and Maruki. Hard work but great fun and immensely satisfying.

The reference to hairpins is oblique. I have never seen so many hairpins scattered as in the loading bay at TheQ. I guess they remain in heavy use in theatre.