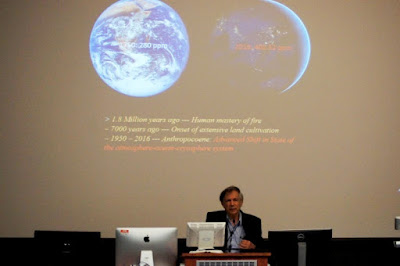 Attending a book launch about the Anthropocene by climate scientists is not a task to take lightly. There are real issues of survival, devastation and the rest and it's not in a phony skeptical environment, where there's any doubt. This is the real thing. There's real end-of-civilisation desperation here although it's not too obvious: these guys are scientists so they explain with rigour. There's respect for evidence that is just a phony incantation amongst the denialists. They call these people warmists using language to change thinking (this is the real political correctness). Their obfuscation and confusion works with some. It's worked with some Prime Ministers of late. Like it works for some in denying evolution. Like it worked in the past for smoking and asbestos and any other denialism, self-interested or not. Just that this is bigger. There were four scientists launching a book by two of them. It was at ANU. The authors were published impeccably by Springer. All well evidenced and presented and praised as a summary of the status. The book is Climate, fire and human evolution. The authors are Andrew Glikson and Colin Groves. Here's a summary better than I can provide:

“Andrew Y. Glikson and Colin Groves’ new book Climate, Fire, and Human Evolution traces the fascinating and complex history of the Earth over the past 4 billion years. It explores the fundamental context of the Earth’s climate system; the cycles of carbon, oxygen and nitrogen and the crucial role of fire, to provide the critical baseline for our understanding of how a single species, Homo sapiens, has changed the atmosphere, oceans and biosphere. The fate of our species, and all the others with which we share this planet, is now in peril from the unintended consequences of our development, and especially our use of energy. I commend this scholarly yet readable work as a vital reference for understanding our past and present, and hopefully for saving our future.” / Prof Lesley Hughes Macquarie University

The event was introduced by Will Steffen, noted climate awareness raiser and Prof of Biological Anthropology. The authors are Andrew Glikson and Colin Groves. There was another introducer, Steve; I missed his full name, an academic in Earth sciences. They said varied harrowing things. About research by Vaclav Smil that found 65% of current biomass on the Earth is human domesticates (cattle, horses, pigs,...), 32% is humans, only 3% is remaining wild biomass (Harvesting the Biosphere : What we have taken from nature / Vaclav Smil). That there are many tipping points and we reach them at various times and that Arctic ice is probably "already history". AG spoke of many things: of fire as the start of our claiming control of the immense energies of carbon; of gazing into a campfire as a link to the natural world; of the starts and ends of geological eras as the most interesting times; of his realisation that the past geological catastrophes he was studying as a geologist "looked more and more familiar"; thoughts about how this could happen, to an intelligent species; about the whisper of time that represents human civilisation (~10,000 years) and how the Earth was for most of time unwelcoming to us; of human mastery of fire dating back 1.8m years, of extensive land cultivation from 7k years back, of the industrial revolution from 200 years and the Anthropocene from 1950. But he is generous: there are personal responsibilities, but our species is imperfect; we are just living in the time the lack of control of energy reaches its outcome. Colin Groves spoke mostly of denialism, how creationism misleads, how it's a parallel to climate denialism, how it's not at all skeptical, how it claims credentials and manages language, how it's so slippery in argument ("like eating icecream with chopsticks"). He lamented Abbott's ignorance of the science, CSIRO CEO Larry Marshall's action to "disgracefully, more or less shut down climate change research", death threats against scientists in the USA, "a considerable chunk of the public doesn't know what science is" and a need to "ensure a situation like this does not continue". I could only hear this as desperation amongst ignorance.

There were questions about Paris. Monbiot claimed it as a political miracle, but a scientific disaster. Our speakers: " wonderful but requires real action", "people need hope", "so painful to be a climate scientist" (knowing what they know and how our public conversation misleads). We have already exceeded 1.5C in some locations; very close to 2C: temperatures that match the Pleistocene so expect flooding to match and "tens of thousands of years to recover". What of the future? Accept the Earth will be a different place: climate, rain, sea level changes; diseases; "much, much poorer". Perhaps there's some answer in geoengineering, but it's unproven and the time required to restore carbon to its storage will likely be too long. Or more philosophical: perhaps accept that life and its beauty is transitory. Either way, there's no doubt that big, unpleasant changes are racing towards us. AG: "Try not to think too much about the future". AG had suggested a meeting on geology of the future but colleagues declined. Be aware that it's the rich West that's the main cause, either from its own actions or the Chinese manufacturing for our purchases. Think inequalities between/within countries and our immersion in a tech-sphere and distance from a biosphere. There are messages from Pickety and Naomi Klein about our soci-economic organisation and climate change. One questioner had obviously read an article I'd read just today, about February as the hottest Feb ever, after the hottest Jan ever, after 2015 as the hottest year ever, after 2014 as the previous record. She admitted to some panic. Another asked are we so important. I've always thought we are, if only to us, but the Earth will continue regardless of our civilisational collapse. Not a pretty thought ... for us. Then a final few words on the Anthropocene. Human history is of "people painting themselves into a corner" but are they any happier? Now, we've reached another, most dangerous corner.

Lots of ideas; lots of concerns; well informed by evidence. Few of our pollies see or at least respond to the urgency; several even promote their own and others' ignorance, perhaps from influence or reading in a bubble. A session like this is an eye-opener. These guys are calm but internally despairing and they are the ones who know. Have hope because without hope we fail, but don't be ignorant. Whatever chance there is, it is with this.

Will Steffen and another academic launched the new Springer publication by Andrew Glikson and Colin Groves called Climate, fire and human evolution : the deep time dimensions of the Anthropocene, at the ANU.
Posted by Eric Pozza at 1:02 pm