Having a Barr of this? 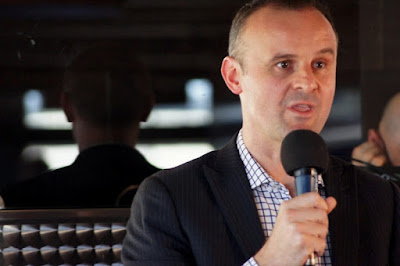 I have problems with the tram, but even so I warmed to Andrew Barr. I've investigated the light rail issue, and I feel reasonably comfortable with my position: it's expensive, won't change much and is unsuitable for this implementation in this town (I'm not alone in questioning the tram, joining auditors, transport researchers, Infrastructure Australia, Productivity Commission and more). There's more but that not the key issue here. Suffice to say, my tram problems are reasonably well based and secure. I went to Politics in the Pub to hear what might come up. The tram didn't (other than a few defensive references by AB himself). Obviously he's a politician and it's an election year, so he's spruiking, but his points appealed to me and appeared "progressive" in a real meaning of the word, meaning looking to prepare for a future. (I don't like the "progressive" label for left-wing: it looks to me like a bit of po-mo/marketing-aware thought management). Ben Oquist introduced him generously: "real agility and innovation in government"; "visionary", gutsy; "a knowledge when things are being done well". (I wondered here about business planning for the tram). I came around as AB spoke of "ideas boom" as motherhood, where detail and implementation are the real test (so true). Then observing that most services in Australia (other than foreign affairs and defence) are done at state level. He spoke of the move to land taxes and Turnbull's praise at some time late last year. That stamp duty raises 25% or revenue from 11% of tax payers. That Canberra has record employment despite a 3% APS cut in the recent budget. That Canberra must remain open to new investment and engage with international partners (in this context, he mentioned Singapore Airlines' decision to come to Canberra). And we are ready for it, with the most educated population in Australia, the happiest and healthiest and longest living and most employed. That 1/9 Canberrans work or study in our universities; 1/10 have ICT quals; 1/3 have post-grad quals (double the national average). He highlighted ACT strengths as renewables (seeking 100% by 2025); divestment (?); public transport; energy and a challenge as "staying ahead of the regulatory curve" (eg, early regulation of Uber, autonomous vehicles). And ACT is the most LGBTI friendly city, a refugee welcoming zone and has the highest (work?) participation of women.

Then questions. Interactions of upcoming Commonwealth and ACT elections, including issues like LGBTI, climate, renewals, public transport. Something about Uber and driverless cars (I wonder about Uber as a multinational coordinator that pays little tax in Australia: we might like ride-sharing but do we ultimately benefit?). Housing regulations and climate change/environment. Labor support for VFT and NBN, as services and as infrastructure investments. A Royal Commission on Mr Fluffy (AB said, given Commonwealth and NSW positions, it won't happen). An angry person on slum landlords and trams to Belconnen and a lost house and the UC Public Hospital. A teacher on CIT and private providers. Something on house downsizing for retirees. Something I didn't quite catch on psychiatric help in schools (?). Involvement of the public in developing and communicating decisions (I warmed to a comment from AB that there are real difficulties, eg, people enter the conversation at different times). Then about Australian democracy. AB stated that States will never be abolished, but more states could be created to work regionally like ACT; regionalism is a positive path, helps with coherence of agendas; that cooperative and competitive approaches to federalism must be balanced; that incentives are how the Federal government influences that States ("there's no safe place between a premier and a pot of money". And a final one about protecting the Safe Schools program: AB committed to maintain it if it's defunded by the Commonwealth.

He made just one attack on the Canberra Liberals, as I remember, in the context of Safe Schools. About this being the most conservative of any state Lib branches, in these, the most left-leaning of electorates. I've worried about that and observed the strong-right leaning Zed Seselja replacing the moderate Gary Humphries. Just one other thing I'll mention, and this in context of public transport. Partly to be humourous, he called an instantaneous straw poll: should a VFT go to the Airport or Civic? The vote was for Civic. I didn't vote and neither did the guy next to me. We agreed it was impossible to make a decision without more information, costings, alternatives, etc. I guess it's a mountain from a molehill, but the very idea you could ask for judgement from the uninformed seemed foolish and contentious.

Andrew Barr (Chief Minister, ACT) spoke at Politics in the Pub for the Australia Institute.
Posted by Eric Pozza at 3:30 pm