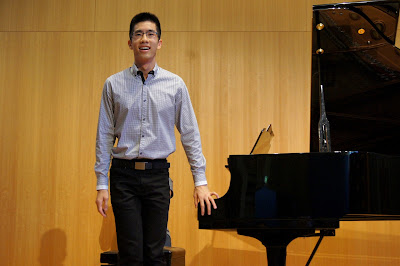 Aaron Chew was playing again at Wesley and this was something special. A world premier, no less. Of a Larry Sitsky sonata: Sonata no.4, The Sufi Path. And Prof Sitsky was there. It's a recounting in music of the steps to enlightenment in the Sufi tradition. Sufis believe that divine love is sought through direct personal experience. They are a Muslim tradition that practices an ascetic lifestyle. The musical form is a prologue, followed by eight movements and a postlude. There are repeating motifs, a quick perfect 5th (G-D) is one and it's repeated throughout. There are haunting melodies, rapid notes, octaves, thunderous hits, sometimes with fists, triplets, percussive chords, careful plays with pedals. There's an end with Prof Sitsky's signature in music, A (La)-Eb (S). Aaron had worked on it for three months. He amusingly talked of enlightenment arriving at the eight movement, after considerable anguish on the sixth and seventh, and a final enlightenment after ~33 mins, the length of the piece. Then a break and Bach-Busoni Chaconne in D minor. This sounded to me as evident Bach but also strangely different, less bell-like harmonic clear, presumably given Busoni work of piano transcription. Aaron is nothing if not energetic and committed and informed but this concert was also an intellectual fascination given the new work and the strangely altered Bach.

Aaron Chew (piano) performed at Wesley. He played the world premier performance of Larry Sitsky Sonata no.4 The Sufi Path as well as Bach-Busoni Chaconne in D minor
Posted by Eric Pozza at 12:17 pm