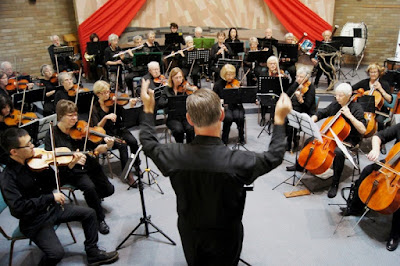 It's almost getting to be passé, playing orchestral concerts. This is my first of three over three weeks, this one with Brindabella Orchestra. The program was a mix of Russian and Northern Euro/Scandinavian composers. The major work was from Tchaikovsky, Slavonic March, with some themes from Rimsky-Korsakov Scheherazade, Swan Lake, Russian folk songs from Liadov, Khachaturian's wonderful Adagio from Spartacus that everyone knows as the theme of the Onedin Line (at least those of a certain age; I knew of it but never watched an episode) and some Dvorak from the American Suite. The odd one out, and the hardest to play, was a medley, Symphonic dances from Fiddler on the Roof. Who would think that's the hardest read? But it was, for the irregularly changing musical-theatre tunes and the Russian-Jewish styled themes and oddly syncopated fills. It doesn't look difficult on the page, but the twists are clangers. But throughout, the orchestra performed with dynamics I hadn't heard in rehearsal and we had a great time of it. Congrats to Brinda for another successful outing.