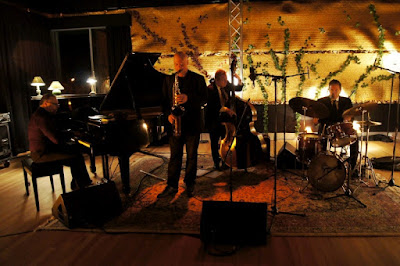 This was the storm. Joe Farnsworth and mates playing at the Street Theatre, not just a few tunes to warm up the workshop, but a full concert. Two sets; eight tunes, jazz and standards, several well recognisable, including my theme, Alone together. Brendan introduced AT with a stunning solo, all chords and hints at the underlying harmonies, then led it out with another solo. Dale played flute on this, joking about a flute found under the piano, but borrowed from a local in the audience. As expected, this was driving hard-bop throughout.

Heads, solos, heads, with hard-core chops. They'd recorded that day with Mark Sutton and I guess that's where they developed their original, Watch out for the Magpies, apparently after Joe was swooped. A true Aussie/bush capital experience. That was an altered blues with a laid back funk feel, bass on 1-2. Sophie Edwards was the Year 12 singer who'd performed Georgia with the band at the Workshop. She was invited up again for another outing. Joe asked for her, when famous, to remember who gave her her break. Brendan spoke; so did Joe. But the essence was the energy and considered and informed drive that these four players laid down. Determined heads and flurried solo lines from Dale; flurries too from Brendan at time, along with some softer chordal and melody interludes; John tended more to a balance of comping left hand and compelling phrases in the right; Joe drove with wit and huge awareness, always watching or his ears alert. I was amused by one solo passage where he was going for a few huge, hustling fills that didn't quite come off, then an annoyed response but it was his unrelenting recovery that stunned me: his recoveries are many drummers' features. Cheers to Clarkey for bringing this band together and doing his Canberra run, back to his home town and jazz school. This was a little piece of hard-bop NYC and it's a stunner to hear. Wish we were just that bit closer.