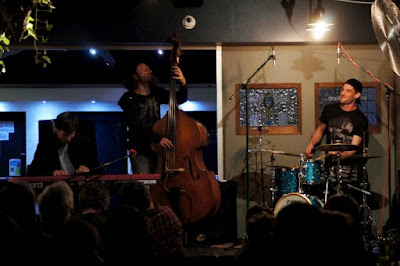 Casey, Bill and Ed, and especially Bill and Ed, are old friends of CJ so written up often enough. Even so, this was their first performance in this group at the Gods, although they had all played there in other formations over time. Surprising given they've played together for five years. It's no surprise that I admire them for the Casey's superb phrasing moving cleverly around the chordal structure and Bills superbly accurate playing that can explode but is kept in lyrical control most of the time and Ed's quiet and intense percussive movements that play with colours of instruments and lead a mobile take on the underlying pulse throughout any tune. This is intense and skilled but disciplined.

All that we've seen developing over the years but displayed even more strongly after these years together and this post-tertiary training time. They played several originals, I think from Casey's pen, and a few standards and jazz tunes. We know the standards so understand better how they improvise their take on them. I should care is a cyclic standard from the movies and the Great American Songbook so their take on this is demonstrative: inventive, playful, sequenced phrases and mobile time feels and a sweet, driving but relaxed walk. Giant steps was more elusive; Fee fi fo fum evident but divergent. The originals were complex in time and often in changes, again mobile in feel and intensely interacted. All the tunes were that: they play like they've played together for time and they have. Perhaps the showpiece was a 25min number that they'd just recorded for release sometime soonish: long form; 3 parts; a certain chordal regularity. Bill laid down his best solo of the night - awe inspiring - and Ed finished with one; Casey was ongoing with his malleable phrasing. Amusingly Casey himself said later in the night he only wishes to hear so much music like this, intellectual and complex and challenging as it is, but this just tells the value and loftiness of this music. Stunningly rich and intellectually satisfying. The quest continues.

Casey Golden (piano) led a trio with Bill Williams (bass) and Ed Rodrigues (drums) at the Gods.
Posted by Eric Pozza at 5:29 pm