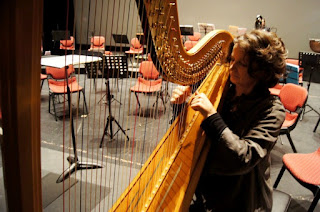 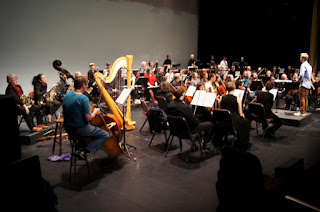 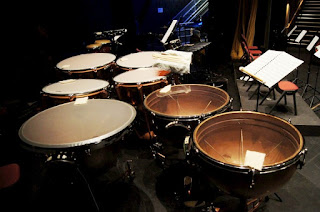 National Capital Orchestra played with Alice Giles and it was a blast. Presumably it was conductor and musical director Leonard Weiss who chose the great program. First up, ecstatic, effusive modernism from Graham Koehne, Elevator music; then little know French baroque from Boieldieu with Alice featuring as the soloist in the Harp concerto in C major; then a lesser known but very attractive and dynamic symphony form Dvorak, his no.4 in D minor. A great and varied program. Alice played with the delicacy and facility of the star harpist that she is known as. Nice to meet her, too, as a fellow performer and friend of the family. Leonard has done a great job pulling together various strands for this concert and his glowing response at the end was deserved. Now that I'm playing in this music, I much better recognise the slips that occur (not least mine). I'm surprised that I now hear them even on professional recordings. But there are such good players in this orchestra! The winds always impress me, clear, well read, sharp playing. And the expanded percussion section for Koehner was a blast, literally. Was it 7 timpani with two players? It is a rare treat to play with fifty steaming performers of one mind on one stage. I enjoyed it immensely and friends in the audience spoke highly and tell me they have already bought tickets for our next concert. Given the program of Carmina Burana and River Symphony and a Wagner feature, and, I hear, a soprano who's performed with the NY Phil, I'm not surprised. (Carmina Burana with Canberra Choral Society on 23 July, Llewellyn Hall). Last weekend, Brindabella Orchestra. Next weekend, Tilt jazz (Mercure Ainslie Hotel, 6.30-9.30pm, Sat 4 Jun) and Maruki Tchaikovsky/Mendelssohn/Dvorak (Albert Hall, 3pm Sun 5 Jun). Busy and enjoying it.