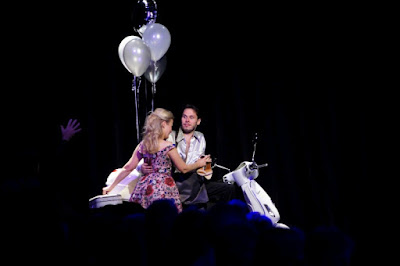 This was opera, but early. Monteverdi from 1619 and 1624; Pergolesi from 1733. Three singers performing with an early music ensemble with harpsichord and theorbo and supplied with the right bows. All in Italian. I could do nothing but think of this as popular entertainment of the time. Presumably it was, being stories of men and women battling in various ways. The main work, Pergolesi La serva padrona (=the maid turned mistress) involved a rebelious servant three hours late with the morning chocolate eventually turning the tables and winning marriage.

A wiley woman outsmarting a man who is ultimately glad to be deceived. I can imagine laughter and wines (it being Italian) rather than a festival and respectful listeners impressed by trained voices. Think commercial stations and sitcom or romantic comedy rather than ABC arts programming. But the voices were good, even excellent. We sat with a woman who had studied seriously voice and who was enamoured with the genuine Italian, Marco Beasley, speaking highly of an ability to hit high notes while retaining a masculine, deeper edge, and his skills at performance. This is opera, so dramatic as well as musical. And the other two singers, too, Taryn Fiebig and David Greco were no slouches, looking believable despite the plots and stark, indicative sets. The sets were just two raised stages in the middle of the lengthy room, with audience each side. The accompanying musicians were middle of the space and off to one side. This was a Festival Ensemble, a mix of musos, but I understand it was led by Forma Antigua, a period plucked string ensemble (harpsichord, theorbo and baroque guitar) from Spain. Obscure brilliance is a feature of this festival. (For obscure brilliance, think Nadia Ratsimandresy, Parisian plalyer of the Ondes Martenot. I gave her a lift to the airport. She told me there are maybe 10 professional Ondes Martenot players is France [it's an early electronic instrument from 1930s France] and perhaps 30/40 in the world. I hear her concert was a stunner). As for popular entertainment of the period, I also noted, about Marco Beasley, that he sang in Italian with the ease and fluency of a native speaker. This was hugely pleasant to me, having lived in Italy for several years and of Italian heritage. For all the understanding and practice of English speakers, it just can't be the same. So, a wonderful night, no doubt even more for those who enjoy opera and its Italian heritage. The CIMF remains ever intriguing. And one entreact insert: Anna McMichael playing Francesco Geminiani Violin solo in C major.

Monteverdi and Pergolesi operas were performed at the Fitters Workshop for the CIMF by singers Taryn Fiebig, David Greco, Marco Beasley with support of the Festival Ensemble led by Forma Antigua and including a few mates amongst others, Laura Barton, the Rayner sisters, Rohan Dasika and Anna McMichael.
Posted by Eric Pozza at 8:03 am