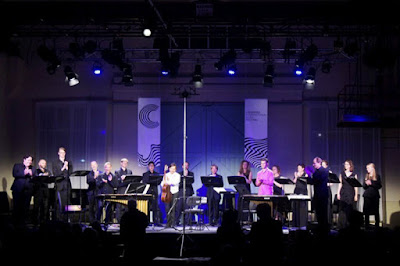 We will only make a few concerts at this year's Canberra International Music Festival. The program seems strongly thematic this year. The title of this concert was El Camino, recalling the Camino de Santiago, the Christian pilgrimage to the remains of St James, from the border of Spain/France to Santiago de Compostela in Galicia. It's now a famous and commercially-supported walk done by many intrepid, not necessarily religious travellers, but it's been a religious experience since the Middle Ages. This take was presented by the Song Company led by Roland Peelman (with addition of some local young vocalists) with guitarist Jose Maria Gallardo del Rey and several percussionists from on drums, cajon and vibes.

The mix of artists changed for the various pieces. I love the Song Company for their wonderful voices, superb harmonies, clarity from solo singers doing single line parts. It is such a great vocal ensemble. That said, the first tune, Three cantigas by Alfonso X el Sabio was my favourite. This was mediaeval vocal chant with occasional claps accompanied by two simple period drums. In some ways primitive, but involving and humane and just fabulous. I could imagine this was just what the pilgrims were singing around the campfire at night and I meditated that they must have been able to sing while we leave it to the professionals. Sad, that, but a function of a busier, richer life with great division of labour. Then guitar with cajon accompaniment. I met Jose next day and he explained this as Spanish guitar, opne to sound like Flamenco or classical guitar in style. The playing was wonderfully sharp and toned and largely played without music (I can only imagine the number of dots on a guitar chart, presuming every chord and arpeggio is annotated). This is one I enjoyed watching, for the impressive left hand technique. Then guitar accompanying the Song Co for Rautavaara, again a composition about Spain (Cordoba is mentioned) and travel and dangers. The final work was a commission for the festival, Gerard Brophy Canticles. More modern, sparse, performed by Song Co with two vibes and guitar accompaniment, and using the words of Psalm 13 ad Ecclesiastes 3 (you all know this one: "a time for every matter under Heaven / a time to be born, a time to die..."). All about journeys, dangers, faith with a marked inclination to Middle Ages religious Europe. Nice.