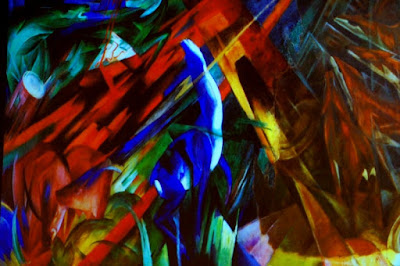 I didn't know of Franz Marc, a German artist (painter) who died in WW1. Chris Latham is running a series of WW1 memorial concerts which are, as Chris is wont to do, seriously broad-minded and intelligently themed. The concert program gathered a series of songs and tunes from the era and presented them against a backdrop of projected pencil drawings and coloured paintings (some watercolours? others perhaps oils?) from FM's sketch book.

Seeing so many works gives a real understanding of the artist's mind, of how he manages the interactions (geometric and very much like Picasso and Braque cubism) and how he colours (bright, primary colours) and what subjects he considers (deer, horses, birds, mostly in nature, but occasionally people but distant, occasionally in human environments distressed by war). Chris mentioned that he died young and may have lived to be famed like Kandinsky, and his swirls remind me of that. Apparently, he also painted blue horses and moderator Alex Sloan, at the discussion before the concert, brought one her grandmother had given her. Apparently blue horse are remembrances of WW1. New to me. The earlier discussion also had Joan Beaumont, professor of history, speaking of the battle of Verdun, of 700,000 lost soldiers over 303 days and Jacqueline Dwyer, well spoken daughter of a French immigrant who returned to France to fight and ultimately survived in Australia. And Chris Latham who spoke of the sketch book. I expect Chris gathered the pictures and the music; he rearranged several pieces for the ensemble of piano, soprano and string quartet. All touching and illuminating and will be well received in the French churches where future concerts will take place. I admire the knowledge and the respect, but am not comfortable with the culture-war expenditure that is this anniversary of the Anzacs. $A550m+ to promote this celebration of war loss; way beyond European countries (Australia $8889 per WW1 death; Germany $2, France $52). The people deserve it; the use by politicians degrades it. But that's politics. The music was intriguing and fitting and the projected works of Franz Marc was enlightening.