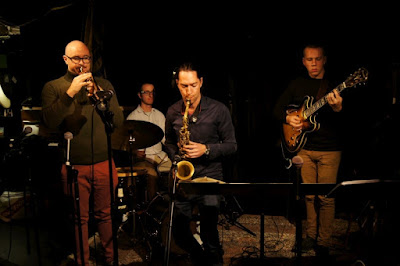 I was lucky enough to hear a Paul Motion trio at Village Vanguard several years back and the format and approach was similar to this gig at Smiths. Two trios played, both bass- and piano-less, drums, a horn and guitar. Jack Beeche's trio featured alto; Brae Grimes' trio featured cornet. A chordless trio like this gives an open, flowing, harmonically-fluid sound. The guitar could play chords, and very occasionally did, but his take was more single notes, counterpoint, horn-like.

I was chatting with drummer Aaron in the break and he spoke of how guitar can move the harmony especially using different inversions. It's a strangely ill-defined sound, gentle and inquisitive, open to lovely flows of melodic interplay. Jack and guitarist Dan certainly had that going, with a swishing background of drum and cymbal sounds, not playing the groove but responding to it, again none to defined. Brae's trio was called BAD trio and it was also very, very good, although this was more direct, with more a feeling of drive rather than float, but trumpet/cornet will mostly be harder and more direct than sax can be. Dan and Aaron played here too. I didn't so much notice changes from Dan, even if there were more twisted unison heads and less obvious counterpoint and a little more bass-like understory, but his backing and solos still spoke with a similar feel even if with , and he excelled with a stunner solo mid-set using loops and a growing growl of overdrive and harder pickup tones, gradually undoing this back to relatively uneffected tones. Aaron was more playing time, harder, more determined. Jack's tunes were some originals (by Jack and one by Dan) and sometimes standards, often melded into gently combined medleys: Monk's Light blue, Mingus' Duke Ellington's sound of love, Jim Hall's Careful, a 16 bar blues. Amusingly, Brae had given his tunes personal names; apparently it was easier to call on the stand than composition dates, so 4/7/15 became Shazza (I didn't catch dates for Bertha, Dwayne or Ursula). Each set had a quartet segment for the last tune, where Brae joined Jack and later Jack joined Brae. I felt maybe this diluted the concept of each band/trio but the music was still impressive. So? Great to hear this style, transposed as it is from Smalls and Village Vanguard and the rest, and played with wonderful authenticity. A stunner.

PS. I listened to Jack's first CD later and was pleased to hear he achieves a similar flowing quality but with bass (Gareth Hill). As a bassist, I can only feel relieved because I love the style.