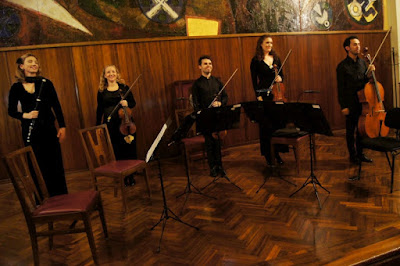 One friend applauded this Australian Haydn Ensemble concert at the interval for its serene beauty and apt recreation of the experience of a Viennese salon. I always admire AHE's and Skye's programs for the intellectual component, the search for a theme and often the finding of a little known piece from an era. This time, too, there was one of those: a Flute Quintet by Wanhal which Skye expected had never been recorded before. Certainly there was no Wanhal Flute Quintet on the Naxos streaming service (BTW, this collection of 120,000 streaming CDs is free to members of the ACT Library Service). Skye described it as a petite concerto and demanding on flute with its use of extreme registers and wondered who it would have been written for. Otherwise, this Vienna salon had music of Hoffmeister, an early musician who managed to live relatively free of patrons, as a publisher and music teacher, Albrechtsberger and Mozart's Hoffmeister quartet. The music was variously a flute quartet and quintet and a few string quartets. The format of the AHE changes with different programs, but there's a core of performers who are regular. This time, Skye, Matthew, Melissa with Anton and Shelley. The playing is always delightful. That wooden flute and the individually expressive string sounds. I admire and learn from the cello bowing. All so light and expressive but also surprisingly voluminous in the large space which is the ANU University House Great Hall. And surprisingly apt, even fronting a wall-sized modernist mural by Leonard French.