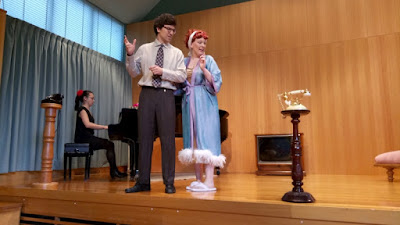 Now this was a blast. Baritone David Smith introduced the truncated performance of American rhapsodies in its serious sense, of the American period after WW2, when hopes for democracy and freedom were high and serious music was made from popular American music and European opera was reimagined as a popular art. Thus we had Some enchanted evening, that entrancing melody from that famed musical, South Pacific, one of the classic musicals, famed for dealing with more serious themes. And we had Rhapsody in Blue, Gershwin's fabulous work of classical awareness with popular exuberance.

[Interestingly, RiB was commissioned by Paul Whiteman and originally scored for piano and jazz band]. And a strange but amusing thing from Menotti, his short opera buffa called The Telephone, in which the female protagonist interrupts her beau's profession of love by taking and making phone calls. David and accompanist Emily performed Enchanted evening straight, revelling in the melody and sentiment. Fair enough: it's a beautiful thing. Then Emily performed RiB for solo piano with an amusing but apt video of snippets from B+W films of the era (streamed to a genuine old HMV B+W TV. Lots of slinky dresses and natty moustaches and kisses and fearful swoons, a ridiculously muscled Tarzan and many famous faces. I enjoyed both but had to draw myself away from the video to listen to Gershwin's fabulous piece. It just shows the power of visuals. Then Louise hamming it up as the loved one in rollers, obsessed with her new tech telephone and her girlfriends' chatter over it, while David, the beau, about to depart, is interrupted in presenting a ring. Poor Louise, not knowing what she's missing, but it works out in the end ... over the phone. Very hammy, very period funny, very well done, great singing. Louise's voice was a veritable powerhouse of thrilling, trilling soprano. All a great entertainment with some well practiced skills treated with appropriate seriousness. Fabulous is apt.