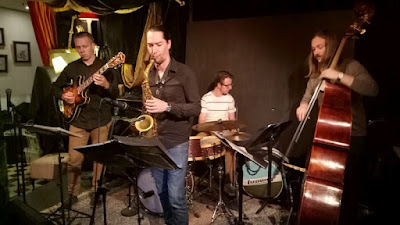 Gareth Hill was back in town with a band he called Slow Code, if only for the night. But what music! Since the virtual demise of jazz in Canberra following the virtual demise of the School of Music, touring visitors are increasingly rare and especially intellectual and musical challenges like this. It was difficult stuff - Jack Beeche was warning me of that before, as one of the performers. Gareth was launching his CD called Slow Code. It's a product of his PhD research into the music of Henry Threadgill, renowned contemporary jazz composer. I once caught HT in a workshop at the Jazz Gallery in NYC and reported it on CJ but I found it pretty metaphorical or maybe over-encompassing stuff. The spiel for Gareth's gig spoke of alternative harmonies, form modulation, improvised counterpoint. Jack showed me a chart and it comprised three staves of heavily syncopated lines for bass, guitar and sax. I had the impression Aaron on drums was also looking at some chart, perhaps that for the others. But this was a base only, a guide for playing or improvising at will. I think Gareth also gave advice on order of solos, etc, so that's the form modulation. He certainly spoke of HT changing tunes most time he plays them. As Jack joked, this was not a gig for after a few drinks. I might add, for the audience too. 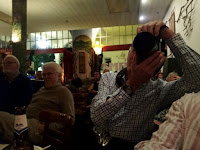 This was highly rich in harmony and dissonance, fleet of foot with change and improvisation, highly interactive with guides but also glances. Everyone played with great competence. Gareth, with his lovely rounded tone, not particularly speedy but wonderfully inventive in intervals and rhythmic play; Dan all speedy on guitar, dropping in harmonics or finger picking clusters; Jack with a wonderfully satisfying alto tone, sometimes quick, often slower and considered and thoughtful; Aaron strong but anomalous with unexpected hits and only toying with standard grooves. It was a stunningly inventive and difficult but satisfying exploration of rhythm and harmony and interplay. Mostly the tunes were Gareth's following HT, other than Dan's Sermon and Jack's Scooping and Monk's Ugly beauty, perhaps via Bernie McGann. A fabulous and enlivening detour through some of the most inventive of music.

Gareth Hill (bass) launched his album Slow Code influenced by the music of Henry Threadgill at Smiths. The band was Gareth with Jack Beeche (alto), Dan Mamrot (guitar) and Aaron McCoullough (drums) and was called Slow Code, if only for the night.
Posted by Eric Pozza at 2:55 pm