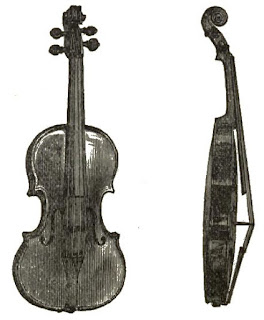 Maybe not so cheap. This year we are not billeting but I am a driver for the Canberra International Music Festival. First up was an airport collection for Alexandre da Costa. Alex was a Canadian child prodigy violinist and now is a multi-CD (25) Sony artist, multi-award winner, performer with various of the biggest orchestras in the biggest locations and also associate professor at WA's Edith Cowan University. I expected to recognise him easily especially given a violin case, but they are so small (mine is a larger instrument) but we found each other and chatted and I drove him to his hotel. So, the not-so-cheap thrill? The Stradavarius in that diminutive violin case. I'd read he also plays a del Gesu, but he confirmed this was a Strad. I've seen Strads and the like in museums (Met, Ashmolean, perhaps others) but never transported one with its esteemed player. Suffice to say, I drove carefully, for the pickup and his later departure.

Thanks to Wikicommons for the Stradavarius pic
Posted by Eric Pozza at 7:49 pm