It comes to us all 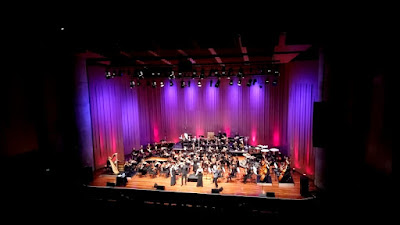 It was the start of the 50th anniversary season for the Canberra Youth Orchestra and it was jazz. Well, jazz as crossed over via film and classics but close enough. The guests were The Idea of North, once formed in this very institution, now a seriously capable vocal quartet. They were backed by the orchestra for most songs, but did one or some parts alone. I liked them best then, when I could really luxuriate in the fabulously precise and complex harmonies. That's the great pleasure of a vocal group and it can be lost to some degree, from backing and from a necessary but intrusive PA. (I have learned that all PAs are intrusive to acoustic sounds; to my ears, only some mega-costly outdoor PAs have come very close to transparency. Not that I don't love PAs but that's another story). The orchestra was a pleasure even if it inevitably intruded on the sublimity of isolated vocals.

They played with care and interaction and a good sense of swing, often playing the role of a massive big band. For big they were: ~77 players. But best from the orchestra was their solo spots, two from Bernstein, his Overture to Candide, but more so, the tragic and dramatic mix that is his Symphonic dances from West Side Story. WSS is a personal lifetime highlight, the film, the tragic and touching music, the fabulous dance, the mirroring of the Romeo & Juliet story, the politically-relevant themes. The symphonic work plays with this, calling up stories and images from the film (and presumably the original Broadway show), the rumbles, the loves, the losses. Tragic and touching, sentimental but real. I love it dearly and I loved to hear it live and they did it with gusto and a slightly rough edge at times. CYO came more to date with the Suite from How to train you dragon, but it's too late a film for my experience. Otherwise, the songs were standards, again some of my favourites: Secret love, Smile. A final Mas que nada, a '60s latin hit. A take on It don't mean a thing that was arranged by Naomi Crellin and conductor Leonard Weiss. Interesting and effective. Also a lovely take on Send in the clowns. But entertainment was never far from the surface; these are professional singers and they have to make a buck. So one song featured beatboxing vocal drumming from bass Andrew Piper. Another was a funny song mixing and contrasting F with F#. Not an easy mix, especially one line midway that wasn't just the tonics. And a encore on Isn't she lovely that had the audience and orchestra split into four parts singing harmony. The pitch suited me so I enjoyed that. And perhaps the quirkiest of all, the orchestra playing a Bach fugue, only to be stopped by IoN for them to play it on kazoos. I guess kazoo playing relies on vocals so it worked harmonically, if not so much tonally. So, lots of classy entertainment and a poignant and stirring piece of Bernstein. Nice.