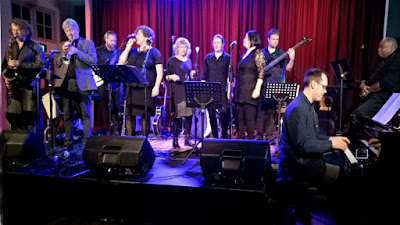 This was great fun, like a family get-together. Elise Walsh out front, releasing her new Bella Groove album. With her regular band of Victor, John and Steve. With various guests invited for her CD and to play at the release, John, Miro, Eric, Hugh and backing singers Francine and Juanita and Sharon who doubled on vocals and keys. A big performance of a series of tunes from Elise's CD including some originals. Should we (dance) was a love song; City of yes was an ode to politcal involvement; Open your mind was an affirmation; City lights celebrated city life. Also original lyrics to modern jazz tunes and some borrowings from Mike Murphy and even some funky Motown originally from the Messengers. Eric apparently grew up listening to that one on the radio. Nice to hear an old favourite that's not too common, Coltrane's Naima. But this was like family. Everyone knew someone or many others, so some good cheer. So much so, the red wine expired and the local pub was mentioned for afters. And a lovely twist: included with entry was a copy of the CD. What a great idea to get your work out. There was some seriously good playing, too, from some seriously good players. There was good sound and a video recording, but mostly the good cheer of Elise and her wide jazz family having a good time. I'm looking forward to sitting down with the CD. Until then, good cheers and some very nice music.