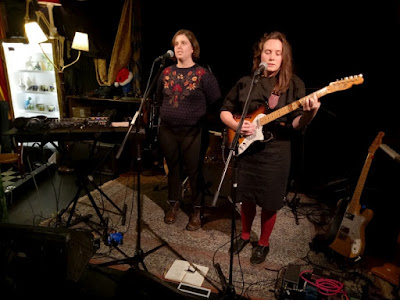 It was Luciana Harrison who was the warmup for Pheno. Luciana is part of a renowned local outfit, Pocket Fox and another called Orange. I've yet to really hear them, but Luciana was an impressive lure. She's essentially a singer-songwriter, original songs accompanied on electric guitar, but what songs! I was impressed. Heart-felt and sensitive, colourful lyrics; varied musical structures, unexpected intervals in melody and added or lost beats in rhythm. Intelligent stuff. Luciana was accompanied for a few tunes by a fellow PF alumnus, Nicola Hearn, providing tight harmonies and even attempting one she'd not heard before (bravely with some strange faces). But I was taken by the clever music. Not for nothing that Pocket Fox was TripleJ Unearthed. A band featuring Luciana's songs with a range of jazz and otherwise trained players: a winner.

Luciana Harrison (vocals, guitar) was accompanied by Nicola Hearn (vocals) at Smiths.
Posted by Eric Pozza at 10:30 am