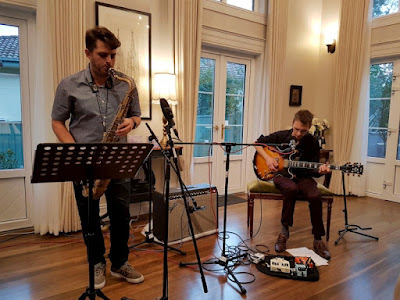 Family matters had me caught up and I heard too little, but what I did hear was a huge pleasure. Just a duo, Canberra-sourced now Paris-based Daniel Hunter returning home with offsider Warren Walker. This was just a duo setting, intimate and restrained, but I was taken by the strong time from the two or just from Daniel playing alone and the sturdy and fat sonority of Daniel's guitar and Warren's delicate, light, even flighty lines (sometimes a little lost against the amplified guitar). The interaction was easy and close, with melody lines dropping together with great comfort or solos that just felt right together.

I liked Daniel's big dirty presence if a mate preferred clarity and cleanliness. I thought the dirt gave a rockish, insurgent presence and I was pleased by Daniel's easy precision in setting time. The tunes were originals from Daniel's albums and his life, one following the Bataclan incident (it was a real connection: a guitar tech he'd known had been injured). This was an intimate concert in Sally Greenaway's new studio, with an opportunity to chat with audience and performers after, so a nice space and a pleasant event. Daniel plays again in quartet format, in Sydney and Canberra, but I can't make it.