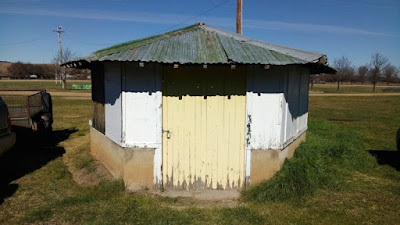 Two days, two concerts, one program, one tour. Well, We played Cook on Saturday and Gunning on Sunday. It's a tradition in Musica da Camera to play local and regional concerts for each program (presumably a well established tradition as MdC dates back to 1979). So two up. It's an interesting experience. I felt the Gunning concert was more relaxed, but also slightly less sharp. The experience from the day before showed, but also the edge for the first concert dissipated a little. And the sound was hugely different: quite precise and controlled in Cook; loud and awash with reverb in Gunning.

Such is a shire hall, outside looking every bit like the local shearing shed. Perhaps it has been. The theme was Old and new: moderns Rautavaara Fiddlers and Chesky Psalm no.1 for strings, all odd counts and dissonant intervals. Then some stately classics, Fuchs Serenade no.2 and Mercadante Flute concerto no.2 Emin. Then Britten Simple symphony, apparently quite well known but new to this neophyte. There were some fast, challenging lines (I like them), some hugely challenging counts (interesting and difficult) and then the whole challenge of making it all sit together well, intonation, feel, time and the rest. This is a capable little string orchestra, for this concert, under a capable director, Leonard Weiss. There were some little errors, some quibbles about placing the beat (it's especially an issue playing pizz), perhaps sometimes a little slow thus heavy because it's a new program and not repetitively performed repertoire, but it was seriously good and well done. Musos are always questioning of their own performances, anyway: they hear every little quirk, every little slip. As it should be. Listening back to audio and viewing video, I'm surprised some remembered slips were trivial and largely invisible. That's the band. For this program, there was also a soloist, Jodie Petrov, playing the Mercadante flute concerto. Apparently it's a standard of the flute repertoire. Variously jaunty, pretty and delicate, driving and bouncy. Nice tune and Jodie did a great job. So, two takes on one program, one local and one regional, one clean and one wet, both eminently presentable. Congratulations to my mates in this one. Proud to be a part of it all and somewhat humbled by some seriously good playing around me.