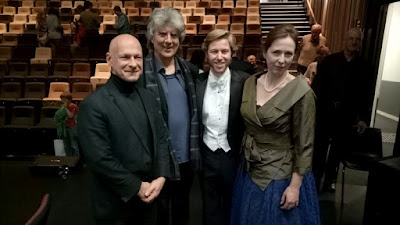 The why for the much ado. The first why was National Capital Orchestra performing its third concert for the year. This was called Emperor in reverence to the Beethoven Emperor concerto which featured after the interval, but there were other wonders. The first half consisted of two modern Australian compositions, complete with composers in attendance. It's always a thing of honour and some little trepidation to play for the composer, and I presume it is for them to hear their works played live. First up was Nigel Sabin and his Symphony 1996. It's a portrayal of Australian life, of land and sea, of pasts that never were (sounds like much of our current politics), of light and even the Republic that's yet to be, given our nostalgia for our multi-citizened head of state (I jest, a Queen doesn't have citizenship, does she? We are her subjects in whatever land).

I particularly loved my first notes, a few bars of pizz which just spoke busy offices in old films, but there was much more, with heaps of odd changing counting. Quite a challenge at times. Then Christopher Gordon's Suite from Moby Dick. It was an early work from him, sometime in the 1990s, to accompany a TV miniseries put together by Americans in Australia. Again, some changing counts, but more flowing and sea-faring and story-telling, specifically of the white whale and Ahab and the Pequod and the chase. Here it was obvious how the orchestra plays its best with the nerves of performance. Both these fell together neatly, the counts played well and the narratives were evident. This is a community orchestra, but the intent and challenges and performance was very worthy. Then interval and one of the major piano concertos, Beethoven's last one, his Fifth in Eb major, the Emperor Concerto, played by Katherine Day. Katherine was trained in Melbourne and London and is now resident in Canberra and now works at the ANUSOM and more. And what a pleasure to play this music with her, both in performance and in rehearsal, so we have played this with her several times. A fine, sometimes rollicking, sometimes profound work with some fine playing, on the night without music. My vision was less on stage, but in rehearsal it was fascinating to listen while Katherine mused, looking into the distance or to Leonard. Again, great playing by the orchestra, too. It's a full day for the performers. It amuses me to see the profs arriving with the audience for a concert at the Opera House or Llewellyn or other. Our experience was not like this. We arrived before 11am to set up the risers and stage and for a revisit and warm up. Then lunch and a beer at the pub and Christopher Gordon speaking at 2.15 and the concert at 3pm then pack up. A full day but immense pleasure, from the music and the great playing, from the excellent little theatre, TheQ, from the good cheer amongst musos in black at the pub and the rest. A great day. Congrats to all and special thanks to Nigel, Christopher and Katherine and Leonard and Martin and the Committee who brought it all together.