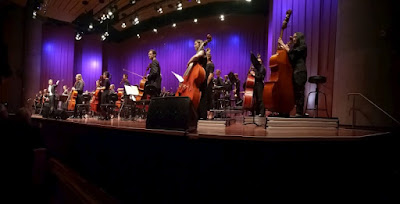 The CYO were out again in force and they were a feat of goodies. They were certainly out in force: there were about 70 of them, with 6 basses - in these straitened times, probably the biggest orchestra I hear. It fitted the repertoire which included a feast of brass- and percussion-heavy tunes, fanfares and the like. Certainly Stravinsky Firebird suite and Shostakovich Festive overture but also Hindemith Symphonic metamorphosis of themes by Carl Maria von Weber. It was a big program, but otherwise the works were more restrained. This 50th anniversary series features guests. The guests tonight were from the orchestra, the winner and runner-up from the CYO concerto competition, Shirahni Mudaliar playing Mozart the first movement of his violin concerto no.3 (not at all brassy or raucous) and winner Chayla Ueckert-Smith playing Vaughan Williams concerto for oboe and strings (more rural and again not rowdy). Both played well. I found it quite an ear-opener to hear such an expanse of oboe, which otherwise bobs up amongst strings or up front to tune.

You can't help but be taken in by the fanfares and thus the Firebird, but I liked the Hindemith for its more modern take on traditions. Interesting. In the presence of the ACT minister, I was mulling over the value of all the CYO and all these traditions. There are people who call the classics (or jazz, for that matter, or most high arts) something of the past, out of time, irrelevant, but then I think of the effort, the commitment, the complexity and demands. Kids who take on such complexities don't have to end up in music, but their training is of a level above then four chord simplicities of commercial, more popular but superficial forms, and it's those thus trained who will provide the informed citizens, the capable specialists and scientists that society needs and benefits from. In fact, from here comes our wealth. I've been bemused by the number of PhDs, doctors and the like that I've encountered in the community classical scene. The CYO is one starter for a rich, intelligent, informed life.