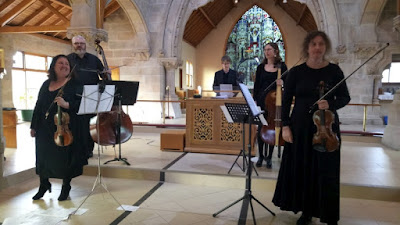 Limestone Consort are one of my local favourites. It's a small mostly baroque group that performs in the wonderful All Saints in Ainslie with its hints at deep, or at least mediaeval, European time. Eminently suitable for baroque concerts. This one was Limestone's first with gut and period bows for the gentle, earthy, authentic tones (and the more frequent tuning). Limestone will be playing at the upcoming Canowindra Baroquefest and they were preparing their program of Trio sonatas for that outing. Corelli, Mondonville, Stradella, Pachelbel, Purcell, Rosenmuler, Telemann and Handel. This was some very stately and dignified music played very capably and with much joy. Leader Lauren can smile with joy when performing. Otherwise it seemed like there was a good deal of quiet concentration, although I heard afterwards of some grins that might have ruined Olivia's embouchure (string players have it easy for making faces). We always learn something from Lauren's intros. She introduced trios in this context as two upper parts with basso continuo accompaniment.

She touched on early, middle and late baroque and styles in Italy or France, perhaps England and Germany and we heard something of biographies, of Stradella as the embezzler and ladies' man and the first failed assassination attempt on him and the successful second (angry husbands, I guess), of Telemann as the most prolific of composers who was also the godfather of CPE Bach, of Purcell's inventive chords or comparisons of Corelli's Italian and Mondeville's later French styles. And the lineup was a little changed. This was two violins, cello, bass, baroque organ, with sometimes a recorder replacing the second violin. Flauto, or recorder, is a delightful and certainly period sound and quite a change from the otherwise string sounds. The responding top lines sound very differently from recorder/violin compared with two violins. I also noticed that the mix was quite bottom heavy, with double bass and cello, presumably unison but the bass an octave lower, assisted with the organ that would have also been playing continuo, although that's an unassuming sound. There's quite a pitch difference there with no intervening viola. So soft but with considerable range. And, as ever, such a pleasure. Limestone is a lovely local group. I enjoyed this immensely and no doubt Canowindra will too.

Hi!I'm DJ,and l make some jazz music,and want to recommend you this cool pack for this ganre - https://www.lucidsamples.com