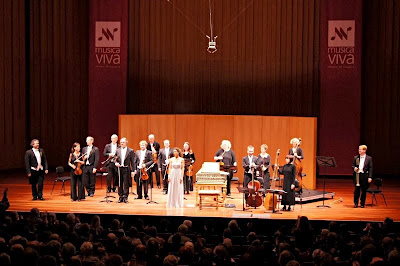 I had two stellar groups I wanted to catch recently, Tallis Scholars and the Academy of Ancient Music. I had a gig when Tallis were performing so missed them (as I did for another last night when the ACO performed Mozart’s clarinet concerto). But I caught AAM with Australian singer Sara Mcliver. I took a while to settle in, but then I realised just how perfectly integrated were these musicians. Their sense of timing and balance and note formation and decay were excellent. Phrases just died in perfect synch. They played Locke instrumental suite form the Tempest and Purcell (excerpts from the Fairy Queen and Arne Overture no.6 Bb and a series of songs or hymn by Handel. The theme was of theatrical music of the era, around mid1600s to early 1700s, introduced as preparatory to Gilbert and Sullivan and even Andrew Lloyd Webber. Locke was entered into with a warning, that he’s “certainly not easy listening … quite weird” - the words of director and harpsichordist Richard Egarr. I found it the most satisfying of the works, with angular lines, counterpoint, odd harmonies. The others were neat and obviously works of expertise, but they were also predicable. Hear one line and you could guess the next. I felt just a little disappointed, but the performance was superb. The early oboes were delightful; the bass was big and omnipresent and the bassoon cut through clearly. Not sure the theorbo / lute was too aurally prominent although it’s an amazing visual presence. I loved watching Paula’s fingers as they formed over the theorbo’s fretted neck, as I enjoyed he relaxed precision of Judith on double bass (four string). There were occasional squeaks, which are the way with period instruments, and the bows were old-style French and the cello was held between legs with no end pin. Blokes wore morning suits, although without waistcoat (English informal, I guess) and the women were similarly attired, but this was not stuffy. The English do this nicely, decorous but jaunty, so I wasn’t surprised by Judith resetting her hairpin in a break in performance. And I should mention the David’s glorious trumpets. He had two, both long and probably without valves. I guess these are natural trumpets, in different keys, played like a bugle, but they seemed to have an almost complete chromatic range. And Richard on harpsichord. I strained for this, other than a feature solo that was besieged with notes. He sat with back and tails to the audience, leading his ensemble, all the world like images of baroque orchestras, which it was, of course. Sara Mcliver performed for most of the program. Clear high notes and coloratura virtuosity. I lost some of the lower notes, but it must be hard for soloists to avoid indulging their preferred ranges.

Some of the music had a predictability as the theatrical music of its day, but I loved the precision and casual professionalism of it all. These are masters from a centre of the art, England and the Barbican and Cambridge University and it shows. This is their 40th anniversary tour. The Academy of Ancient Music were Richard Egarr (harpsichord, director), Pavlo Beznosiuk, Colin Scobie, Iwona Muszynska, Bojan Cicic, Rebecca Livermore, William Thorp (violins), Jane Rogers (viola), Joseph Crouch (cello), Judith Evans (double bass), Frank de Bruine, Lars Henriksson (oboes), Ursula Leveaux (bassoon), David Blackadder (trumpet), Paula Chateauneuf (lute). Sara Macliver (soprano) sang.
Posted by Eric Pozza at 8:38 am