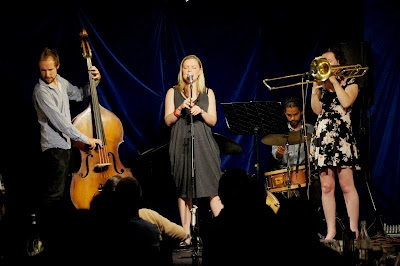 At one stage, Gian Slater commented on U.nlock, her band with Shannon Barnett, Sam Anning and Rajiv Jayaweera, as being a challenge because there were no instruments of fixed pitch. U.nlock is vocal, tromone, acoustic bass and drums, so hitting the right pitch takes good ears and technique. I didn’t hear it as a problem, though, and Gian joked that it wasn’t “95% of the time”. This is also an open-sounding band with no chordal instruments. They did it all with skill and accuracy and considerable panache. I was drooling over trom harmonies below Gian’s soprano voice. I loved the solo bass and the modern take on scat that used sidestepping and sequences and clever dissonancne like any contemporary sax.

I was stunned by some trom solos, that fat raspy tenor tone, sometime staccato, only once somewhat flourished, but always definite in chordal relationships and pitch. Not that this was too mainstream. The trom and bass could be deliciously independent of chord tones and tonal centres when they chose to be, moving very freely against or over the changes. Alone together is a tune that I regularly practice but I didn’t recognise the opeining bass solo and only just picked up the tune from the liberally arranged head. Contemporary jazz can stray very far from the underlying tune; jazz is now a very evolved art. Noone got lost, at least amongst the band. They played some originals by Gian and originals and arrangements by Shannon and a series of standards. These are old friends from teritiary training in Melbourne and they were getting together a tour of Wangaratta, 505 and more. It’s a return for Shannon, Sam and Raj who have been in NYC for several years. They were reading charts for the originals but it all sat easily. Raj is an undemonstrative drummer but clear and firm and steady. Shannon also had me thinking of how each instrument, or perhaps each group of instruments, has its own patterns, phrases, lines that sit easily. Her solos were not solos of sax, although she was fronting the same tunes. Similarly, hers were nothing like Sam’s bass solos. As guitar and keys solos are not like either. Both played clearly defined ideas of intelligence and responsiveness, but each was different. As were Gian’s solos, which were perhaps more like keys, sequences of scalar snippets, but with delicacy of tone and some everests of pitch, that were nothing like the earthy tone of the trom. All interesting, exploratory and quite a unique combination with some exceptional musicianship. Bring on more of that NYC vibe. U.nlock comprised Gian Slater (vocals), Shannon Barnett (trombone), Sam Anning (bass) and Rajiv Jayaweera (drums).
Posted by Eric Pozza at 8:52 am