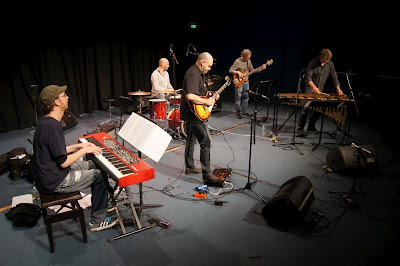 Jazz rock / jazz funk / fusion. It’s music that I passed through in coming to jazz, so I’d passed it over for some time. But I was enraptured the other night when Peter O’Mara’s Affiliation played it at the ANU Band Room. This amalgam of hot solos over simple chord changes, infusive rhythms and tortuous heads can be a great pleasure. For music like this, the language of youth seems apt: I was stoked. My foot was tapping steadily (although crossing the beat against a 7/8) and my face held a big smile.

Peter’s guitar was screaming in the high frets, then just distorted, then comping with single notes, often unison with bass or keys or vibes, or effected into old synth tones. Tim’s vibes were straighter, in tone and musical conception, but just so perfectly lyrical and well structured in solos. It’s not a surprise that he wrote most of the music on the night. His musical ear was obvious. The bass and drums were bubbling along underneath, rather than featuring, but they were essential. Imre’s Tobias bass (yes, an electric and a pleasure) took a little line of melody at one point for a few bars, and one nicely restrained solo at another, but mainly it sat low on the neck and split the beat. This was finger funk: fewer or single notes syncopated, mostly tonics, not lots of runs or chord notes, but stating the root and tousling it. Christian’s drums were similarly busy. Again, there were a few solo features, and these were very nice outings, but this was busy while supportive, a choppy scaffold for the overlaid solos. Michael’s piano did the same – these were all rhythm players in their time – but I was particularly fascinated by his solos that continued the choppy theme. I could see his hands, spread in chordal shapes, some fingers holding notes while others lifted then dropped for feature notes amongst the chords and the whole lifting for changes. The tone was Nord Rhodes ring mod, a perfectly rugged tone. Then the left hand would lift to the mod wheel and little lines of synth would appear from this seascape of whitecaps. What pleasure it was to revisit such impressive and well-felt funk. This music has purpose and verity that we easily dismiss in lesser hands. I remember how much I’d enjoyed Return to Forever for much the same reasons. Fusion was a rite of passsage for me and for others, but when it’s good like this, it’s authentic is its own right. A blast and a pleasure.