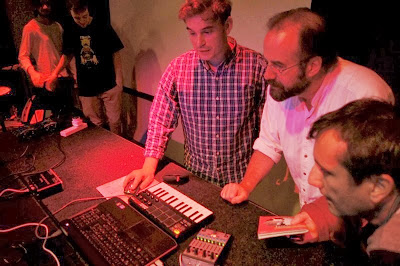 It felt like an album. Markus Popp stood, or rather gyrated, over a laptop and a few little controllers and the sound was complex and the themes appeared like tracks on a CD.

There was structure here and consistency. The rhythms may have been tortuous and the harmonies the same, but it sat with authenticity. This is electronica but he was saying it’s just one branch. The conventions of jazz or classics are respected but manipulated. We spoke with him afterwards and he talked of the strength of drum sample libraries and how they are different but approaching the complexity of acoustic sounds. They were still obviously digital, but with an alternative authenticity and richness. I’d been impressed by the sample tones. Big, processed drums and delicate strings and classic synth patches and bells and even the sounds of damaged electronics. The PA was powerful and deep. There were just a few hits of sub-bass but mostly the range was more human. It’s all music over a PA. He joked that he’d had to leave the cello in customs, but I just envied his achievement, done with a laptop and a few measly little add-ons. That’s the way to travel. But I was convinced by the performance. This was genuinely big and complex and I’d describe it as symphonic in extent, but it also had improvisation from his triggering of a multitude of samples. He was performing pieces. Presumably he’d prepared and processed samples to suit any one theme. Certainly, his Ableton Live screen was a mess of colours and lines which were the samples he had on hand. I guess he could further process in real time. His interfaces were a little keyboard controller, a trigger/mixer and a mouse. Big sound and big concept from so little gear. A laptop as a valid alternative to an orchestra? Sure beats a theremin for richness.

Marcus Popp appeared as Oval at the National Film and Sound Archive.