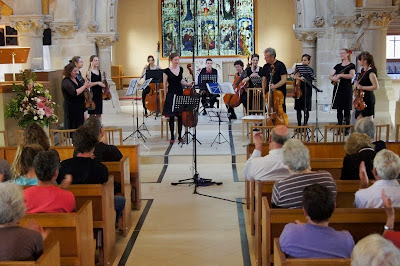 David Pereira joined the Limestone Consort for a cello-heavy concert over the weekend. It was called Back to Bach and I guess it was a play on back to back. The concert started with Dad Bach JS and his Brandenburg concerto no.3 in G major with three cellos. It ended with Son no.5 Bach CPE and a very different music, his Symphony no.1 in G major. Director Lauren observed that both Bachs were prolific; that JS was reclaimed by Mendelssohn (it’s hard to think of Western music without JS Bach as a lynchpin) and that CPE was influential for Mozart and Haydn and Beethoven.

Also that CPE’s symphony was “quirky” with jumping dynamics and unexpected phrases. I liked how the mathematical integration of baroque got an intrusion from vibrant and colourful lines of massed strings in CPE’s work. It’s a different feel from the dry but attractive intellectuality of counterpoint. But this one only had two cellos; JS had three. They also performed Vivaldi’s Concerto for two cellos (with a third in support) and that was a fascinating opportunity to compare two cellists on similar material – here teacher David and student Clara Teniswood. Master David was stronger and more confident but Clara did an admirable job as colleague. There were several shorter pieces, two choral preludes from Brahms and two aquarelles from Delius. The Brahms impressed me as pieces rich with symphonic development, one dignified and the other welcoming and generous. Lauren commented that, if push came to shove, she might pick Brahms as her favourite composer. I warmed to these pieces. The Delius were apparently annotated to be played on a summer’s night on water. The first had a pretty descending melody with string backing. The second was more mixed, with what I heard as an American theme (perhaps borrowed for some film?) leading to flowing swells. I was most amused at David’s introduction to the premiere of his Double concerto for cello and violin. Not so much for what he said, that the cello has proved good to get work and that it’s down the “pecking order” against piano and violin. I could only think that the bass is so much further down and clumsier too. A cello seems such a neat and portable instrument to a bassist. This was a harder work for the consort, more dissonant, very varied. There were features for harpsichord and bass. There was strength in cello and huge distance in range of cello and violin when they played together. There was a middle movement with no strings in support. I’ll be listening again to my recording because this is a demanding modern piece with various references. So this was a worthy and wide-ranging concert complete with a world premiere. I was impressed. David Pereira (cello) performed with the Limestone Consort at All Saints. The Limestone Consort comprised Lauren Davis (violin, leader), Lucas Allerton (continuo), Alison Giles, Alys Rayner, Jacqueline Smith, Mia Stanton (violins), Sarah Ingram (violin, viola), Elysia Fisher, Hannah Keese (violas), Clara Teniswood, Jack Hobbs (cello) and Kinga Janiszewski (double bass).
Posted by Eric Pozza at 9:56 pm