Taming Fury and the left 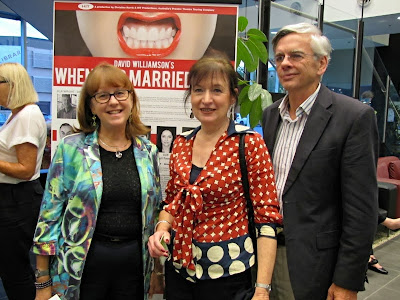 It’s topical. Megan says it touches on many current issues of concern to this demographic and it does. I’d seen the Removalists yonks back at an Adelaide Festival of Arts. It was new then and much talked about. It’s still remembered. As is Don’s Party which I saw again in the last few years when it was revisited by Canberra Rep. They say David Williamson is prolific. He’s renowned. We went to see what is presumably his latest, When Dad married Fury. Rich father surprises two sons by marrying an American half his age, and Christian Tea Party to boot, then she gets pregnant and he dies. Issues? For the sons and at least one wife, it's the inheritance. For the playwright, it's finance, class, families, religion, politics, more. It’s standard soft-left POV. The Right would go gaga if they worried about this anymore, but plays are pretty harmless in the hands of superannuants with left predilictions. More power to seek elsewhere; more coal to mine. In the end, there are some twists that might even discombobulate those lefties. The Tea Party religionista is generous. Arch-leftie wife ends up admiring water ripples with Mum and decides she can’t spend every minute saving the world. Audience claps. Trouble is, we probably don’t have time for our lefties to rest. Physics is like that. As for the play, its heart’s in the right place but not beating so hard. But that’s show business.

When Dad married Fury was written by David Williamson, Denis Moore directed for a run at TheQ Performing Arts Centre at Queanbeyan.
Posted by Eric Pozza at 8:25 pm