Another day, another suite 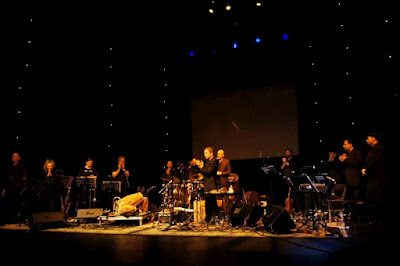 And here I am thinking jazz suites are rare. This was Lloyd Swanton's composition, mostly music, but with accompanying and explanative spoken word and projected photographs. Again, with a collection of some of Australia's best jazz-oriented musicians and even a classical mate of mine, James Eccles, of the Australian Haydn Ensemble and Noise and more. The Ambon suite told the story of Lloyd's uncle, Stuart, who was sent with Gull Force to Ambon Island in WW2 to protect against Japanese invasion.

It was a woefully inadequate response, a doomed action, and Stewart and Gull Force ended as prisoners of the Japanese, enduring harsh treatment for several years, Stuart dying of beri-beri just the day before the end of the Pacific war. Tragic and sad for family. Interestingly, while researching, Lloyd found webs of connections, not least that the father of legendary Melbourne jazz drummer, Brian Brown, had also been prisoner and died on Ambon. It's a small jazz world. We have heard much of military matters recently as the Abbott Government lavished on the centenary of WWI, and I just hope this worthy project got some of that funding.

So what of the performance, of itself and inevitably with some comparison to yesterday's jazz suite by Stu Hunter? There were spoken words but not singing; music that was both more traditional (mirroring the music of the time) but also noise, of dismantled wind instruments and tapping various other instruments and bass with rattling metal attachments; the playing on all was impeccable; I drooled over the silver sheen of Michel Rose's pedal steel guitar (more complex than I'd imagined: 20 strings, 9 pedals, 8 knee levers? I have loved this instrument since hearing MR with the catholics - he told me that was early '90s; he'd left to play with Lee Kernaghan); I enjoyed the classical and authentic touch with James E playing uncle Stuart's actual viola; I was entranced by yet another solo by James G played with his uncommon abandon; I enjoyed some heavy beats in the second half, although these were not common, and some exquisite four part wind passages, and otherwise some delicate percussion; a passage of tunes by the strings was lyrical, just bass, viola, pedal steel, ukelele and guitar; I was intrigued by the uncannilly authentic sounds of tropical birds and forest in one passage; I was blackly amused by some stories, like the unknown brother flying low over Ambon Harbour for sheer bravado and surviving Japanese ack-ack, or of the meat-case bass. This was aural colour and historical song, religious faith and humour in adversity all in a true family story. There were even pics of Stuart's gravestone, now updated with military honour, and of his diary now resident at the War Memorial. This was touching, educative and musically satsifying, so a great success all round from a wonderful set of mature, communicative musicians and a emotionally touched composer. A second wonderful jazz suite.