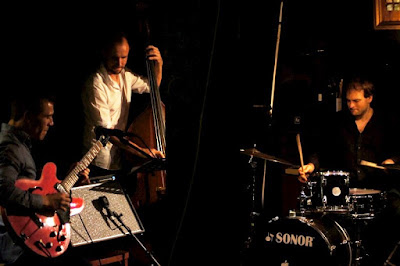 NYC is too far away for Canberra but a little of it was back at Smiths after its workshop outing that afternoon. This was Quentin Angus, ex-Adelaide but not NYC, leading a trio with Sam Anning, six recent years in NYC but recently back in Melbourne, and Ari Hoenig who I've only known as NYC. A stunner! Quentin led with several of his capable compositions plus a few that displayed his interests, Wes Montgomery, Charlie Parker,

Goo Goo Dolls (Iris), Oasis (Wonderwall). Again, the updating of the standards repertoire with songs of today: it's an essential refresh. Quentin had spoken earlier in the day of the business of music: playing melodies that people know is one aspect of this. I also liked the political reference. As we fret over Trump, one of Quentin's tunes was One for Bernie (Sanders). Obama campaigned on hope: we could do with some now. But the playing? Variously restrained and exuberant. Quentin's is neat and precise, thoughtful, clean despite some discrete background echo and an intriguing freeze pedal. Sam's is also precise (they all were this!) but more playful, swapping lines back and forth with the hugely exuberant Ari. Ari's a master of the polyrhythms, although always with a purpose in the tune, cognizant of melody. But busy, he is. There's huge embellishment here, dynamics, rhythmic subdivisions, colour that washes over the band. I was amused by the interplay of Sam and Ari and additionally amused to hear Sam checking tuning in a solo and making it part of the music. This is virtuosic playing. Quentin is also listed as a composer and you can hear the complexity in unison lines and neat accompaniments - and see it in 5-page charts that get turned over mid-tune. As ever, NYC visits with chops and intellect and I love every visit. It had me resubscribing to the Smalls feed. At the edge visiting the centre.