To fret or to despair 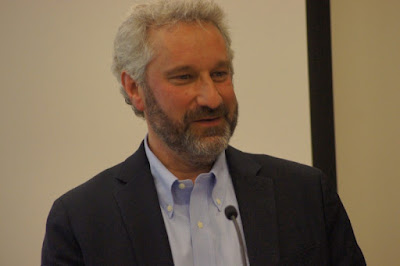 With all the despair around the US Election, here was one session I couldn't miss: a seminar at ANU on US Climate policy after Obama, ie, after the upcoming election. These are serious sessions and well worth the visits. This was convened by the ANU Climate Change Institute and introduced by its Director, Mark Howden, with key guest was Elliot Diringer or the Centre for Climate and Energy Solutions, with a past in the (Bill) Clinton White House. This was not a party-political presentation (although some despair or disdain is inevitable when considering some future options). 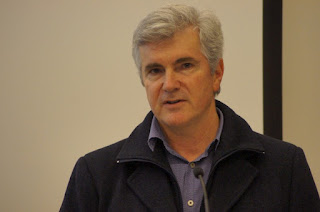 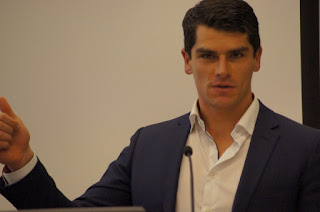 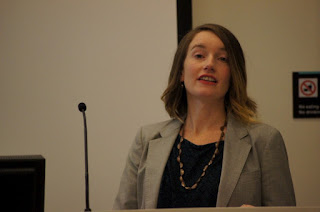 Elliot Diringer spoke first. Firstly on the foundations for the present, how there was emerging climate bipartisanship but how it failed especially in the context of the Tea Part and conservative backlash. Then about Obama carrying out limited actions under Presidential Executive Powers, made possible as the Supreme Court included greenhouse gases under this act. Thus, standards were introduced for vehicles and power emissions were limited by plan for implementation by the States. The death of Justice Scalia brought Congress to deny a replacement, presumably hoping for a Republican win. Then Obama and international powers used for the Paris agreement and for lead-up announcements with China (oh, how that discomforted our own anti-Climate-action warriors, not least Abbott). But the agreement had to be implementable without Congressional agreement, so it is fragile. The current status is US emissions (thanks also to natural gas and new tech) is reduced 10% and a landmark climate agreement (Paris) is in place but the Clean Power Plan is in legal limbo through State actions and the outcome depends on a new Supreme Court Justice which awaits a new president in 5 months. And this election is "unusually, unpredictable ... humbling for political pundits" and will lead to the "solidification or unravelling of [established] climate change actions" given the "stark difference" between Hillary (Clinton) and Trump. Hillary has engaged with negotiation, launched coalitions, outlined comprehensive plans for a "clean energy superpower". Trumpet has no record in public office, has rhetorically called climate change a "hoax" (memories of Abbott and his "crap" call), (if I have this right - it seems so nutty) suggested it's developed by the Chinese to roll back US dominance by bureaucratic control, and that he'd cancel the Paris Agreement and declare US energy dominance. Wow! So, possible scenarios are these: 1. A Trump president who is true to his word; a return to US climate policy dark ages; EPA remains obligated to control greenhouse gases but is delayed; US withdraws from Paris which undermines the will of other countries. 2. A Clinton presidency with Republican control of Congress, requiring continued Exec powers; resistance from the States; the question of which Supreme Court Justice replaces Scalia; a possible window for legislation to enact a Carbon tax with more general fiscal reform (with public support and private sector impatience with uncertainty). 3. A Clinton presidency with 1 or 2 houses to Democrats or detente with Congress, or Trump wins and forgets his previous lines and makes a deal. ED is not a fan of US Exceptionalism but he does see the US as decisive in climate matters. There's now a decent agreement in place, 2degC is "extremely demanding" but is depends on countries "all doing our fair share".

The local panel members were Eliza Murray and Luke Kemp. Luke spoke first. A Hillary presidency would be BAU (Business As Usual); can the Congressional deadlock [on more than just climate] be broken?; Trump ("the most interesting scenario for me as a pessimist") can't cancel Paris but can withdraw the US and this is "detrimental perhaps not fatal" and other US actors (cities, states) may continue to act and some renegotiation may be required to deal with country withdrawals (difficult and not quick). The Paris negotiations were effective but risky (but necessary given Congressional intransigence). Then Eliza on the history of policy making in Australia, how the Carbon tax/ETS were withdrawn and how a centralised approach (as in Australia) has these dangers; about how some constituencies and action, carbon farming and reinvestments were retained under Direct Action; about how maintaining a string of actors tests approaches and is less risky (but less likely in a smaller federation like Australia).

There were questions about "bottom-up" movements and city/state action and flexibility; how Obama's earlier legislation failed despite Democrats holding both houses; about the need for different language than "carbon tax" [how trivial but necessary - so much for informed citizenship]; about Hillary's approach to the election "we are going to put a lot of coal miners out of work" but offering support for the change; about country-level carbon inventories that predate Paris, how measurements are for where a fuel is burnt and how planes and shipping are not country-based; about the UNFCC; renewable industries and the US. What thinking is in place to protect Paris post Trump? Was it ED who was terrified by this scenario: US withdraws from Paris; bullish decision makers are destroyers [reminds me of Abbott once again]; without US at the table, a US return becomes harder over time. Otherwise, this has all happened unexpectedly and quickly, so little thought is yet given. What if Sanders runs as an independent (almost audible groans) and pretty much the end of the session.

There was more than this, but you get the gist. Watch this space over coming months. Mark Howden, Elliot Dirringer, Luke Kemp and Eliza Murray spoke on US Climate policy after Obama for the ANU Climate Change Institute.
Posted by Eric Pozza at 11:39 am