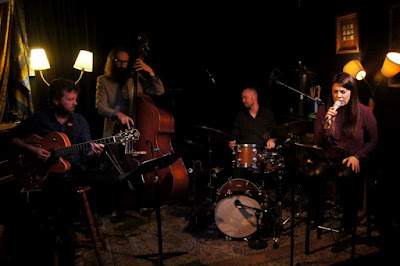 Rachael Thoms' dedication was to the original hipsters, the jazz musicians and hip followers from the time of '40s Bebop through to '60s cool, one radical musical stream of their age. Rach's introductory spiel for the show says it best: "These cats talked the talk and walked the walk. They were laid-back, sarcastic, sexually open and partial to the old ‘Green Badger’. They were ‘hot stuff’, ‘mad mellow’, and ‘out of this world’. Their shoes were ‘kicks’; and their teeth were ‘crumb crunchers’. Boys were ‘groovy’ and girls were ‘fly’ … The pioneers, the nerds, the weirdos, the trailblazers, the vanguards, the masters." Perfect.

Rach gave us the words of the hipsters themselves, witty or profound, eminently quotable, and their music, their ultimate expression. The selected hipsters were Monk, Benny Golson, Dave Brubeck, Bill Evans, Bob Dorough and Miles. Every tune was sung, often with lyrics added later by jazz vocalese singers. Famed tunes like Round midnight, Take 5 and Devil may care; slightly lesser known masterpieces like Nardis and Whisper not; some common blow calls like Well you needn't and Blue Monk; profound numbers like Waltz for Debby and Blue and green; and the inevitably amusing ones like Too close for comfort ("One thing leads to another / too late, to duck for cover / too close, too close for comfort / now" with that ambiguous final word). And this was about the best band in town that I could imagine playing this light and tight, lyrical music with such deceptive ease: Rachael with her classical chops and jazz sensibility; Lachlan so clean and precise (Rachael's "human metronome"); Chris understated and ever aware; James accompanying then soloing with huge, unbasslike lyricism. These tunes can sound old and overworked but this was fresh, vibrant, crystalline. I was refreshed by the pleasure of the standard repertoire but I shouldn't be surprised given the band. Maynard G Krebs would have claimed Monk as the original hipster, and so might some others, but they were all geniuses, at least near enough for jazz.